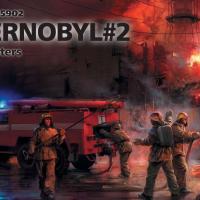 Once again ICM is modeling one of the worst man-made disasters of the 20th century – the catastrophic explosion and meltdown of the Number 4 nuclear reactor at Chernobyl in 1986 – an event that would impact most of the world in one fashion or another. That ICM has the boldness to create such a fascinating look at recent history in model form says a lot about this company’s choices of subject. The fact that they are continuing with this series says even more.

In the Chernobyl #1 set, we explored the sealing of the area and the first radiation checks by local authorities. In this set, we confront the conflagration itself, with firefighters taking the first steps to control the resultant fires caused by the explosion of the reactor. This set combines a large fire engine, four new firefighter figures, a bit of debris and a picturesque backdrop that duplicates the cover of the box.

First up is the assembly of the fire truck itself, which went together with few difficulties. Full engine and underbelly detail is included, as well as the rear control piping for the onboard water tank. Unfortunately, none of the equipment lockers or cab doors are designed to open, which is rather a shame as I would have liked to make a somewhat more active diorama that I was provided with. However, the truck itself is a complex enough build, as it comes with all the external equipment found on such a machine. A note here – one of the firefighters is carrying the rescue hook, which is also provided on the fire engine itself. If you want to be strictly accurate to the diorama, you’ll want to cut off the brackets and install them separately. I also noted that one of the firefighters on the kit box seemed to have nothing really to do and was holding his arms in an odd manner. Checking up on a hunch, I discovered that the figure is really meant to be unloading the small personnel ladder, as the arms were at exactly the right position for this. So if you want to use this figure in the same manner I did, don’t install the smaller ladder on the truck either. In order to paint the cabin first, I chose to leave the roof off initially, although the water cannon mounts to this. With careful assembly, however, you can assemble this and simply slip the cab roof under it when you’re done with the interior, as I did.

Painting the fire engine exterior is an involved affair, as it has an interesting two-tone finish plus a black chassis. The kit doesn’t provide any masks, so care should be taken at this point as it’s easy to screw it up. There were also some discrepancies between the kit cover and the instructions, as the instructions show the wheels with white sidewalls. Inspection of a number of online pictures dissuaded me from adding this feature, as it is apparently rare. I chose to keep weathering to a minimum, as most fire departments maintain their machines in meticulous order. In keeping with the topic of the kit, the markings for the 2nd and 6th Fire Departments from the nearby city of Pripyat are included. These are the departments which initially responded to the emergency.

Moving on to the figures, four firefighters are included – one manning the hose, one adjusting the hose pressure, one carrying the rescue hook and the last one removing a ladder from the fire engine. All are well molded with excellent equipment and clear face shields – four raised and four lowered, so you have a range of options. Because of the complexity of the firefighting equipment, you might want to do the assembly in stages. For the three figures with oxygen systems, for instance, I found it easier to put these on the figures before installing the heads. I also painted the helmets separately and attached them after the rest of the figures were painted.

The painting instructions were surprisingly poor, and I once again resorted to the internet to see Russian firefighters in all their glory. I noted that there is no mention anywhere of the reflective strips that almost all firefighters worldwide wear on their gear, and which were clearly visible on all the pictures online. These added a little additional interest to the figures. It is also good to note that even with Russian firefighters, there’s a fair amount of variation in the protective gear colors. These seemed to be close to what I could find in relation to Chernobyl.

Small bits of rubble are included with the figures, and I am sorry to say that literally every piece came with an annoying pin mark right in the middle of the most awkward location possible. A little filling and sanding fixed these, but really . . . quite annoying. If you’re going to go whole hog on a diorama for this, you might supplement these with appropriate chunks of plaster or molded brick.

Lastly, in setting up the scene, ICM supplies a small piece of rubber tubing to attach the firefighter handling the hose spout to the truck. This piece of rubber was far too stiff to permit any drape, so I simply substituted a piece of appropriate solder bent to a natural shape as substitute.

The diorama backdrop is brilliantly printed and does a wonderful job of depicting the hellscape that confronted these brave firefighters. With all the pieces from the kit appropriately arranged, a lovely full scene was the result. Fascinating!

All in all, this is a remarkable kit with excellent quality and value, plus the sheer audacity of the concept itself leaves me somewhat agog. I highly recommend it to anyone interested in this period in history (or who lived through it). You will not be disappointed. My thanks to ICM for continuing the knock my socks off and to IPMS/USA for letting me take another shot at this incredible series. Stay safe, everyone, and happy modeling!