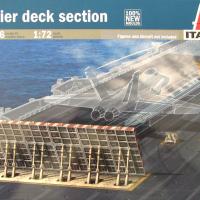 If you have been waiting for a great way to display your favorite 1/72 scale modern US Navy aircraft, your wait is officially over. I have personally been waiting for at least two decades for someone to release a molded plastic version of a modern aircraft carrier deck section, and Italeri has answered my prayers. This kit provides a large portion of deck showing a section of the catapult, jet blast deflectors (JBD’s), and JBD control station for what appears to be a Nimitz-class carrier, number 2 catapult area. Measuring an impressive nine and a quarter inches wide and about 15 and three quarter inches long, this base will hold any aircraft launched from a US Navy carrier deck since the Nimitz was first introduced. In short, I cannot recommend this kit highly enough for a more realistic display of your favorite Tomcat, or any other Navy plane flown from 1974 to today, from the decks of these fine ships.

Several years ago, I picked up a foam resin release by Verlinden of this exact topic, and that kit contains the foam resin deck along with standard resin parts for the JBD’s and actuators, but required you to purchase brass tubing and square stock to complete the actuators. This carrier deck section also appears to represent an older class of aircraft carrier. A few years later, Dragon released a carrier deck featuring a catapult section, JBD, and launch control station in 1/144 scale, which has been issued with different aircraft over the years. I believe that some other companies have made similar offerings along the way, but I have not personally seen them available, nor I have seen them in my mail order supplier’s listings.

As one would expect, the jet blast deflector was something that became necessary with the advent of the jet age following World War 2. I did not have a full appreciation for what these devices did until I watched my first night operations onboard the USS Dwight D. Eisenhower (CVN-69). When a Tomcat went to full power prior to launching, the flames would actually not just strike the JBD, but they would be deflected upward. No other jet was capable of that feat, at least none that I witnessed. The backside of the deflector panels have pipes running along them that pass seawater through to provide cooling. The modern JBD is quite a step up from the first carriers that launched jets, which utilized a simple wooden slat deflector.

On opening this kit, you will not find many parts, but you will find a section of deck that fills the box, while the other fifty parts are contained on two identical sprues. The plastic is smooth, with the exception of the deck area, and is light gray in color. The instructions are on a single sheet of paper folded twice to produce six pages for the seven steps of construction. There is a decal sheet for all of the deck edging and stripes for the JBD panel edges, but I opted to paint all of mine instead.

I will say that there are many options when it comes to painting your carrier deck section; I chose to paint mine to represent Cat 2 on the USS Abraham Lincoln (CVN-72) when we first left the Newport News Shipyard. According to the photos I have, the deck edge around the JBD was yellow, the edge around the control station was red and yellow, and the edges of the deflector panels were white. You can find photos, even later shots of the Lincoln, showing red and yellow around the deck edge for the JBD, and red and white stripes for the edges of the deflectors. There are also some different schemes for the inside of the JBD, so I recommend checking the references for the ship you are portraying. Even the tie downs on the deck can be found to be white in some photos for some ships, but they are typically a dark gray (as I learned when becoming a shellback).

In building my carrier deck section, I utilized Model Master Acryl Flat White, Gloss White, Insignia Yellow, and Insignia Red. I also used Model Master Enamel Euro 1 Gray and Navy Gloss Gray, as well as Model Master Metalizer Dark Anadonic Gray, Burnt Metal, and Magnesium. I masked the area around the deck edge for the JBD and airbrushed it, while the edge around the control panel was painted by hand. I opted to add the JBD panels after constructing and painting everything, as it seemed like a good idea. With a little patience, the panels will all go into place, but it would have been helpful to get assistance when installing the actuators to the panels. I was nervous about having an opening in the middle of the large deck piece, but I believe this is where the mold pushed in the plastic. Just be cautious in getting part 12a installed to ensure that it sets properly, as it is not a hatch (although I did consider making it appear as one).

As far as my hits of this kit are concerned, having a catapult section of a Nimitz-class aircraft carrier released in 1/72 scale has been something that I have waited a long time for, and I would think that there are other modelers out there with similar thoughts. Construction was relatively easy overall, with the only challenge being the installation and alignment of the JBD panels, especially if you save this for the end. The non-skid coating on the deck is realistic on the kit parts, making it look reasonable for the scale.

My only real miss was in regard to the decals, as the yellow looks far too bright for what is actually used on the ships, which is largely why I decided to paint the markings myself. As the Lincoln did not have red stripes on the JBD panel edges, I did not use those decals, but the colors appear fine. The decal for the control panel, if used, may present a challenge if the panel is raised, since there is a portion of the decal that fits on the panel, while the remainder goes on the deck edge. There were sinkholes on the backs of the JBD panels that I filled with discs removed from .007” styrene sheet. There were also several loose parts with my kit, but they were captured within their bags. There are four posts on the underside of the large deck section, which I presume are to keep the deck from settling over time. Three of mine were broken off, but all were in the box and easily repaired.

Fujimi released figure sets a number of years ago in 1/72 scale that were made just for a display like this, and that is what I placed on deck for a few of my photographs. I do not readily see these items as being available today, but with a little searching on the Internet, I am sure that a set or two can still be found. I expect to have the figures painted and in use on the deck in the not too distant future, perhaps when I share my next review, the MPC F-14 Tomcat.

As I started my review, I cannot recommend this kit highly enough for fans of modern carrier aircraft. As an option, there are photos of the Naval aircraft of other countries launching from the decks of US carriers during multi-national operations, so even an Argentine Super Etendard or French Rafale would not necessarily be out of place.

My heartfelt thanks to the folks at Italeri for producing this wonderful kit, and especially to the people at MRC who provided this as a review kit to the IPMS-USA Review Corps. I also always like to thank Steve Collins and the folks who keep the Review Corps running as smoothly as it does, and finally, yet importantly, those who read my comments are always appreciated.

Prior to adding deflectors

Lining up a Tomcat

Top view with plane and figures
Previous Next