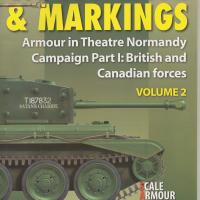 This book is Part I of Volume 2 of the Camouflage S Markings series from Guideline Publications, publishers of Scale Aircraft Modelling and Military Modelcraft magazines and the Warpaint series of books. It covers British and Canadian armored (armoured? – two countries separated by a common language) forces in Normandy.

In the Introduction, the author explains that the purpose of the book is not to give a detailed chronological treatment of the campaign. Instead, it is supposed to cover the camouflage and marking of the British and Canadian forces “in the context of examining aspects of the role of armour in the Normandy campaign and not in terms of a chronological retelling of the different operations conducted during its course.” There is a brief discussion of the lead-up to the landings and events that occurred subsequently. The author describes the ‘funnies’ used by the 79th Armoured Division, then goes into German planning and the consequences of those plans. This is followed by descriptions of the different types of Allied tanks used during the campaign. Then we get to the discussion of the colors and markings used on these vehicles.

We get a short description of the major German AFVs used, their armament and some discussion of their relative value. This is followed by information on most of the different operations executed by the British and Canadians, from Operation Perch in early June through to Operation Goodwood and Operation Spring in late July. Included here is the author’s opinion of the reasoning used by Montgomery and an explanation of his start-stop-regroup style of offensive combat. The book is concluded by a short narrative of the combat from the German perspective. It details the combat losses and the difficulties the Germans had in getting replacement vehicles, illustrated by use of tables of starting and ending numbers of tanks.

Though seemingly a bit disjointed as a read, the author says from the beginning it is not meant to be a linear description of the battle. He lists a bibliography at the end of the book with plenty of resources if that’s what one is looking for. There are lots of pictures of British and Canadian AFV and, surprisingly, lots of German ones, too. The color profiles cover a wide range of vehicles, from Universal carriers to Sherman Crabs and Churchill tanks. Also, surprisingly, there are several profiles of German vehicles, covering virtually all the major AFVs they used in Normandy. As you can see from the attached pictures, those profiles almost without exception are large and span across two pages.

So, was the book useful? Yes, if you want pictures of AFVs in use in Normandy and as a guide to coloring and marking of those vehicles. Was the book interesting? Yes, for those same reasons and, strangely enough, for the discussion of why Montgomery did things the way he did. I had never thought about it from the perspective the author gave.

Thanks to Guideline Publications for providing the book for review and to IPMS/USA for allowing me to review it.