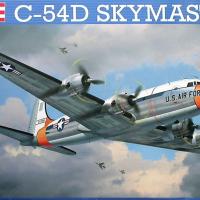 The C-54D was a derivative of the DC-4, which was first designed in 1938. It had a 117 foot, 5 inch wingspan, was 94 feet, 3 inches in length, and was powered by four Pratt & Whitney R-2000-25 engines of 1,450 HP each. By the end of production, Douglas had turned out 1,241 machines. They’re best remembered for their role in the Berlin Airlift where they became known as "Candy Bombers" for dropping candy to refugees by small parachutes on the way in to offload supplies.

The kit comes in a large colorful box, and contains 352 parts molded in light gray plastic. The model has recessed panel lines, and many parts had light flash on them. Due to the high parts count, I highlighted the letters on the sprues to make them easier to identify.

The interior is well-detailed with over 80 parts, installed in a concentric inner fuselage, but most will not be seen when finished. It even has a drift meter as a separate piece. Since I didn't plan to open it up, I just painted a basic interior. The engines are made from 10 pieces, but you can only see 3 when the model’s finished. Revell provides both open and closed cowl flaps, and a choice of two different type wheels. Be careful when cutting parts from the sprues; I inadvertently cut off some “flash” from parts E-2 and E-3 (the sides of the nosewheel bay) and later found the “flash” was hooks for the doors). Also, parts J-92 (the oil coolers) had to be reversed to fit right. I found it better to install parts N-100 and N-101 (the firewalls for engines 2 & 3) before installing parts K-96 and K-97 (the recessed “dishpan” areas of the firewalls)---the opposite of the instructions’ sequence. The flaps can be posed in the down position, but it requires surgery, so I left mine up. The instructions were a little vague for me in that area.

The fit throughout was good, but not as precise as I expected from new tooling. The nacelle-to-wing joints and the leading edge of the wing-fuselage joints needed filling. Revell supplies a tail post, but also specifies the amount of weight to install so the model sits on its nose gear. I chose to weight mine, and the instructions suggest 70 grams, but there’s plenty of space for lead weight or shot. The filling of three windows on the right side was challenging, since I didn’t realize it was needed until after the model was painted. Another window was filled but was clearly indicated on the instructions.

I chose to close up my example, but there are separate cargo and entry doors which can be posed in the open position. Revell provides two choices of decal markings; I chose the Troop Carrier as I saw one in the movie, "Bridge of Spies". Most decals settled well with Micro Set, but some needed Micro Sol as well.

There will probably be other future releases because the cabin floor has holes for the cargo configuration on one side and different holes on the other side, likely for airline seats. Overall, a great subject and very detailed, but with more parts than I needed. Too bad more of the interior can't be seen.

I thank Revell and IPMS for giving me the opportunity to review this kit.