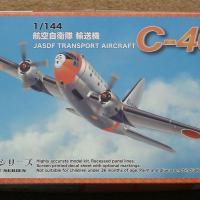 Platz has added to their stable of excellent kits with its issue of the Curtiss C-46D, in their JASDF series. The size of the real aircraft means that even in 1/144 scale, this is a pretty good-size model and doesn’t require micro-surgery to work on. The kit’s molded in light gray plastic with beautifully engraved panel lines and detail.

Rather than pins and sockets, the fuselage halves are fitted with zipper tabs to align them. A basic flight deck with seats, control columns, and an instrument panel is supplied which is adequate for this scale. Fit of all parts was excellent except for two areas---one on the upper mid-fuselage seam, which required putty and sanding, and the other being a relatively big step where the lower wings meet the fuselage. The lower fuselage seam is sorta tricky to smooth out because of the little hoochies sticking out of the body, which I assume are fuel or cavity drains or cabin heater fittings. The photo shows the gaps on the lower wing-to fuselage joints as well as these small items. A little finesse will be required to sand the seam and not remove the detail.

The engine cowlings are three-piece assemblies---though I don’t think the JASDF ever had any C-46’s except D models, this probably leaves the door open for Platz to issue the kit down the road as another version with different engines, props, and cowlings.

The C-46 was somewhat of an antenna farm, and various ones are given in the kit, the builder determining which ones are appropriate to the version being built. There are some differences between the installation step in the instructions and the side views of the aircraft on the colors and markings pages, as far as the number of antenna and their placement is concerned.

The Cartograf decals are excellent and give alternate markings for a USAF aircraft from the Korean War, as well as numbers for all 36 JASDF aircraft. It’s not stated in the instructions, but the decal sheet gives the builder the option of installing the windshield, painting over it, then using decals for the flight deck windows. The cabin windows are given as gray decal rectangles, which to my eye don’t show up as well as black ones would, but that’s just my personal preference.

I opted to build my model as a 402nd Squadron Transport Command aircraft from Kisarazu AB. I remember these aircraft from the few times I was at KIZ, and noted that they were always very clean and very colorful. I saw several transient C-46s during my time in Japan---they were adorned with several bright schemes of natural metal and a high-visibility orange. The kit option is relatively simple, but there were also other C-46s with big lightning bolt-looking fuselage trim, plus orange wing and horizontal tail panels. The photos on the box art are in fact, one of those and not the decal option in the kit. By the way, I opted to paint the red-orange on my model rather than using the decals for that purpose. I used Tamiya acrylics for the base coats and Testors Non-Buffing Metalizer for the NMF.

The lower nacelles and the wing surfaces behind them on the JASDF aircraft are painted black---the kit gives the wing areas as decals, but not the nacelles’. To ensure getting a nice sharp demarcation line on the nacelles, I applied short strips of black decal to the sides of them and then filled in the NMF areas with black paint.

The wheel hubs are separate from the tires, making painting a snap. The landing gear is well-done but I don’t know what the large hub affair is on the right side of the tail wheel. I didn’t see that in my references.

A separate photoetched detail set is available for the kit as Platz’s item number M144-3 and gives interior details as well as complete wheel well detail. The kit could use something in the main wheel wells, as they’re pretty bare forward of the main gear.

The canopy on my sample was nice and clear, but had a molding flaw on the left side cockpit windows which was inside the piece, so polishing couldn’t remove it. It looks like the clear plastic was injected into the mold in two pumps, making a mark where the second shot hit the first one.

The kit is great, period. The small problem areas I encountered were minor and easily taken care of, and this is maybe the nicest 1/144 scale kit I’ve built to date. Gracious thanks to IPMS/USA and to Platz, for allowing me to build and add this jewel to my collection. I’m buying a couple more.

The right side cockpit windows’ flaw

The NMF areas between decals filled in with black

A full decal sheet from Cartograf

Small detail on the belly and a wing-to-fuselage gap

Parts are beautifully detailed
Previous Next