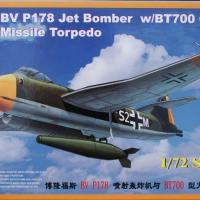 Bronco Models has a full line of Luft ’46 aircraft and the Blohm and Voss P178 has been boxed in several different versions, mainly changing on the weapon being delivered. The BV P178 was an asymmetrical aircraft, with a single engine offset relative to the fuselage (something that Blohm and Voss was an expert at) and this particular machine had a Jumo 004 jet engine. I was not able to find any images of this particular aircraft, but I did find a few black and white images of the weapon BT700.

The model comes in a very sturdy box, with 5 sprues (1 clear) for the aircraft and 1 sprue for the weapon. The total part count is low, about 50 parts total. Parts are finely molded, with panel lines being crisp and well defined. There was no flash in my sample. You also get two decal sheets (including stencils) providing you with German, Finnish, Romanian, Hungarian and Italian markings.

The assembly starts with the wings, then the fuselage (with a separate cockpit/nose sub-assembly) and finally the tail and engine. Main assembly was simple, with good fit all around and it took me about 90 relaxed and enjoyable minutes to have it together. Assembly of the weapon was straight-forward too.

Cockpit detail is somewhat simple, but under the closed canopy is fine. If you choose to have the open canopy you might want to add more detail.

The instructions call for 10 grams of ballast in the nose. Honestly I was not able to pack that much weight into such small volume. I added as much weight as I could in the cockpit area behind the seat and even in the nose wheel well, but it was not enough. I ended up with a tail sitter. Good thing the manufacturer provides you with a clear part to support the tail.

I only had to apply a touch of filler on the fuselage spine and the join of the nose to the main fuselage. After that I was ready for painting.

I was not sure which marking to apply, eventually choosing the RSI Italian markings with a camouflage of RLM 81/78. I also added a red trim to the engine, for contrast. With the red, white and green of the flag, the model still has some color, while being basically a camouflaged airplane.

This kit is a simple and fun model, which makes for a good “speed-build” and change of pace, or provides a canvas for those that would prefer to super-detail their models. Other than not having enough room to accommodate for the nose ballast, this model is perfect for a beginner.

I would like to thank Dragon Models USA, Bronco Models and IPMS/USA for the review sample.

View of painted underbelly and weapon

Right-front view of aircraft
Previous Next