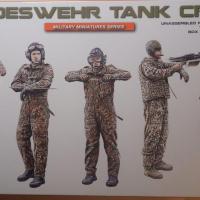 MiniArt is a Ukrainian company specializing in 1/35 figures and some vehicle kits. The figures tend to be packaged in groups with unique poses or unusual subjects. Over the years, they have become one of the leaders in injection molded figures, and more recently, they have started issuing sets of modern military figures.

This kit is one of their newer releases and features figures to be posed with modern German AFVs. The kit includes five figures in various poses, and includes a female crew member representing many modern armies that have women serving in combat roles. The four male figures are posed in a standing position that is meant to be posed in the turret hatch of the vehicle. The female figure is posed sitting.

A close look at the sprues shows that the parts all have some amount of flash on them, and there are one or two minor air bubbles that will have to be addressed during construction. The four male figures all have some sort of eye wear, either goggles or sunglasses. With the exception of the one wearing sunglasses, the eye wear is a separate solid part. The box art shows that two of the figures have clear glass on the goggles, but that’s not the case as the goggles are solid plastic. Two of the figures are wearing head protection, which comes with an awkward separate piece to represent the 3 bump protection strips across the top of the helmet. I’ve used Miniart’s Soviet tankers with similar headgear, and those helmets were molded as one piece with the bump protection molded to the helmet, so I’m not sure why they decided to make it a separate piece on these figures. All five figures have headsets and radio microphones, with separate handheld controllers. These pieces are all provided in plastic and with the flash and size of the parts, care will need to be taken when handling these pieces. In the end, each head consists of 4 pieces, not including the figures that have a separate neck/uniform collar piece.

Instructions for assembly and painting are provided on the back of the packaging. I assembled Figure C. On the box art, this is the center figure and he is posed in a standing position, wearing goggles over his eyes with his arms resting on the top of a vehicle. Each figure’s torso consists of 5 parts, one for each leg, arm and the body. In addition to those pieces, Figure C has a small part for his collar and the top of his turtle neck, which his head will attach to. The head consists of four separate parts. He is one of the figures wearing a helmet with a separate piece for the bump protection and a separate piece for his microphone, and finally his goggles. As I mentioned earlier, his goggles are a solid piece and if they are posed as the instructions say, you would end up covering more than half his face. The microphone attaches to the side of his helmet, but no attachment point is provided. Also, although he is intended to be wearing goggles there is no strap for his goggles, and there is no wire to attach the microphone to his handheld controller.

When I constructed the figure, I posed his goggles pushed up onto his helmet, so that his face wouldn’t be covered. I used a stretched piece of sprue to represent the headband for the googles, it’s definitely oversized, but I didn’t like the look of his goggles just sitting on top of his head. I considered using a small piece of photo-etch, but getting it to attach to the goggles proved too difficult. I did use a thin piece of wire to represent the wire connecting his microphone to the radio. The body went together relatively well, there is a minor gap at the small of his back, but overall fit was good. Completing his head was a little tedious. It seems like the helmet could be molded as one piece with the bump protection included, and photoetch would probably make a better microphone part.

Once built, the figure looks nice. The face is good, and each figure has a different facial expression. The coveralls are well detailed and his pants and arms are properly creased without having the folds overly done. Unfortunately, since the intended pose is for him to be 80% inside a turret, most of those details will never be seen. The instructions show close ups of two German camouflage patterns, Flecktarn or Tropentarn. Since I’m not sure which vehicle I plan on putting this guy into, I held off painting the camouflage. I did prime him to help show the details. First with a black grey, and then highlights with Tamiya Buff to bring out the details.

It's nice to have some modern figures, and really nice that they have included a female figure to better represent modern armies. The poses are realistic and while there are some issues to deal with during the construction, these figures will make an excellent addition to any AFV vehicle and are recommended for armor builders. Thanks to MiniArt and IPMS/USA for the review kit.