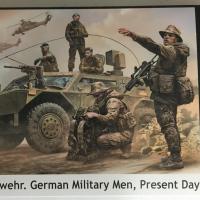 The molding of the figures is very crisp, and there are lots of details, particularly on the clothing and equipment. The faces each have subtle differences but are difficult to distinguish in this scale without high magnification. The biggest challenge in building these will be to eliminate the mold line around each part. Thankfully, since each one is wearing a hat, there is no hair detail to work around. These lines are common for a kit of this type and a little filing and sanding will take care of them, but be careful around the fingers, thin parts of the equipment, and the cigarette that one figure is holding.

The instructions are printed on the back of the box, and clearly indicate which parts are used. As I have experienced with other Master Box kits, it does not give you an order of assembly, or show specifically how each part attaches to the whole. I suggest that you construct one figure at a time, leaving parts on the sprue until you need them, and thoroughly test fit every part before gluing. The instructions also give two examples of camouflage patterns to be used with these uniforms, and has color codes for Vallejo, Lifecolor, and Hobby Color paints.

As is common with figures of this nature, gaps will likely occur between the legs, where the legs meet the torso, and where the arms attach. Carefully applying superglue to these spots, followed by a light sanding, or using a product such as Vallejo plastic putty, will effectively fill these gaps.

This kit is consistent with the quality I have seen of other Master Box kits, and it provides multiple figures and equipment for a reasonable price. I am impressed with the level of detail in the figures, and I believe these will greatly enhance an appropriate vehicle or diorama. If you are looking for figures of this type, or are unfamiliar with Master Box, I recommend that you pick these up!

Thanks to Master Box for supplying the figures for this review.

Sprue Close Up 1
Previous Next