Building Concorde: From Drawing Board to Mach 2 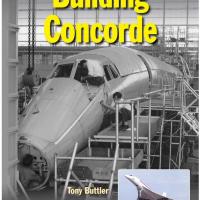 Tony Buttler was born in England in 1956 and completed his education at Prince Henry's Grammar School in Eyesham. He joined High Duty Alloys in Redditch in 1974 as a metallurgist and for nearly 20 years he was closely involved in the testing of aluminum and titanium airframe and engine components for many of the world's most important airplanes. It was during this timeframe that his interest in military aircraft grew into a passion. Tony left High Duty Alloys in 1993 Buttler and enrolled at Loughborough University, earning his Masters Degree in Archives and Library Studies. He subsequently became a freelance aviation historian specializing in the design and development of military aircraft. Since 1995, Tony has been a freelance aviation historian, with this book being his twenty-seventh major release. He has also written many titles for the Warpaint series of monographs as well as many articles for most of the popular historical aviation magazines. His special interest in one-off prototypes and research types made co-authoring X-Planes of Europe a particularly enjoyable task.

Jean-Christophe Carbonel was born in 1959 and wrote his first modelling article in 1977. His first single work in English language was in 1991 for the British magazine Collecting Scale Models. He admits that part of his knowledge of the English language came from reading the Airfix instruction sheets, which were, at the time still English-only. Since then, he has pursued a writing career specializing in model kit history and in the history of aviation projects, prototypes, and early experimenters. Jean-Christophe has more recently specialized in French designs of all eras. Writing for various magazines on both sides of the Channel, the recent volumes of French Secret Projects were his first solo books for a British publisher.

The Concorde was jointly developed and manufactured by Sud Aviation (later Aérospatiale) and the British Aircraft Corporation (BAC) under an Anglo-French treaty. Twenty aircraft were constructed, including six prototypes and development aircraft. The original program was plagued with huge cost overruns and delays, with the program eventually costing £1.3 billion. The Concorde operated from 1976 until 2003 by Air France and British Airways, each with seven aircraft. It had a maximum speed over Mach 2 with seating for up to 128 passengers. First flown in 1969, Concorde entered service in 1976 and continued flying for the next 27 years. The only other supersonic transport to operate commercially was the Soviet-built Tupolev Tu-144. A huge factor in expansion was the limitation of the aircraft to ocean routes due to the sonic boom over populated areas. Combined with limited production, both the British and French governments had to subsidize the Concorde’s development.

Tony Buttler and Jean-Christophe Carbonel’s latest book is a thick hard cover featuring 240 glossy paper pages (including 6 pages that are for advertisements for other Crécy publications authored by Tony Buttler and Jean-Christophe Carbonel). The front cover features a black and white photograph of Prototype 02 in assembly at Filton. The front cover inset is a color photo of a Concorde taking off. The bottom of the rear cover features a color photograph F-BTSC during 1975’s proving flights. The rear cover black and white artwork inserts include an early Concorde concept with four separate jet nozzles, a Hawker Siddeley Type 1000 airborne, and a Dassault Super Caravelle shortly after taking off with its landing gear hanging out. I counted 199 black and white pictures, 97 color photographs, and 35 tables. Many of these pictures and illustrations are published here for the first time. The contents include:

Tony Buttler and Jean-Christophe Carbonel cover the Concorde much like they have covered their previous British and French Secret Project series of books. Each company’s proposal is discussed and is accompanied by line drawings, illustrations, model photographs, and specification tables. Chapter five introduces the idea of a joint British and French collaboration and addresses the business and political aspects of creating a successful relationship. The development details of the Concorde are addressed in the next three chapters before diving into the prototype test and evaluation phase.

I really enjoyed the background in Building Concorde, which has (probably) never been covered in such depth before in any language. The focus on including the early gestation of the Concorde from both the British and French perspectives was quite intriguing. I was truly fascinated with Sud Aviation’s proposal for a nuclear powered airliner based on their Super Caravelle proposal.

Tony Buttler and Jean-Christophe Carbonel, both provide a very readable text that is well supplemented with photographs and drawings. The authors cover a lot of ground in this tome, yet I was still able to read the book easily over a week. If you own one the previous releases in the Secret Weapons / Projects series by Tony Buttler and Jean-Christophe Carbonel, you know what you are getting. If this is your initial entry into their work, you will be quite pleased.

I agree. An excellent book.

I agree. An excellent book.