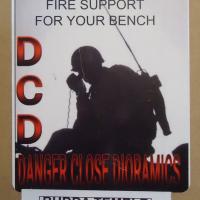 Danger Close Dioramics is a relative newcomer to the area of diorama accessories, but they seem to be expanding their offerings at a good pace. The subject of this review in their Buddha Temple in 1/53th, which features a statue, base with steps, background wall and 1 side wall. DCD also includes several strips of bamboo-like plastic that can be used to enhance the scene if one wishes.

All resin parts are molded in a fairly dark gray ono-porous material which, although not bubble-free, is still relatively clean. All items in this set were clearly cast from open-face molds, so that back sides are not particularly pristine, with some overfill as well as some underfill with a certain amount of resin “cupping” along the edges. This does mean, however, that there are no casting blocks to remove.

Cleanup is still a fairly involved process, however, and is made much easier if you possess a Dremel with a sanding drum attachment. I used mine a LOT to clean op both the backsides and edges, and it’s absolutely vital to perform this task with at least a mask on, if not an exhaust fan. The dust generated by this task is murder on the lungs. No instructions are provided for assembly, so checking out the Danger Close Dioramics web site is useful to make sure you’re not missing anything.

One of the things that got my attention was the relative thinness of the cast parts compared to other resin diorama parts I’ve dealt with in the past. This meant that none of the main pieces (walls, base) were completely true, complicating the assembly process. Under other circumstances I might have straightened them out with some boiling water or a hair dryer, but I assembled them “as is” to see how well they went together out of the box. There was some noticeable warping of the main wall which prevented it from butting up against the base for its entire length, and some serious putty was needed to rectify this. The side wall was also a bit warped, and had to be coaxed into position with a fair amount of superglue.

All that being said, it does assemble into a fairly nice background piece that paints up easily and would be quite suitable for any Asian-based scenario one might wish. I’m actually quite pleased with the final look of the piece and look forward to incorporating it into some diorama soon.

So, I can recommend this diorama item with some caveats. Be aware that a good amount of cleanup may be involved, and assembly needs to be performed carefully to ensure a decent fit. The final result, however, is a visually arresting piece that should enhance any Asian scene one might have in mind.

My thanks to Danger Close Dioramics for providing this review item, and to IPMS/USA for a chance to check out this latest player in the field of scene-building. Stay safe, everyone, and happy modeling!