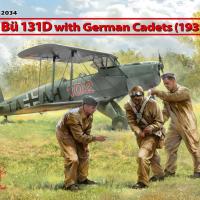 The Bucker Bu131D “Jungmann,” which means “young man” or “cadet”, was developed in the 1930s as a light primary trainer for all Luftwaffe pilots. Extremely small and agile, it was mostly steel tubing with a fabric covering, and proved so popular that over 200 are flying in private hands to this day. I even found an entire scene in the European “Tintin” series of comics which shows this durable little aircraft in the less-than-capable hands of Thomson and Thompson, twin detectives (see the Tintin adventure “The Black Island”). This model set offers not only the aircraft itself, but a pilot and a couple of handlers to go with it.

The aircraft: like the real deal, the model of this aircraft, even in 1/32nd scale, is pretty diminutive, and makes for a relatively fast build. However, due to the nature of the real trainer, some of the parts are exceedingly fragile and require extraordinary care when removing from the sprues. The landing gear brace, for instance, was broken on the tree in three different places even before I attempted to remove it.

Typically, the build begins with the cockpit area. The delicate tube framework is very well represented, although once again the parts are quite fragile. The control panels come in clear plastic with decals, and do a nice job of representing this area when finished properly. As with all ICM aircraft I’ve made so, far, no attempt has been made to represent the seat belts, so they’ll either have to be found elsewhere or scratchbuilt. Both seats also have a moderately annoying mold mark in the center which will need rubbing out.

The engine is nicely represented. I was intending to display this with the panels open, but encountered my only real glitch in the assembly, which was at least partially my own fault. Unbeknownst to me, ICM includes two complete sets of engine shrouds, although the unused set is not shown in the parts layout page at all, leading me to believe that the first pieces I spotted were the only choices. Since the engine panels start at the cockpit, these erroneous parts were already completely locked into place when I discovered my mistake. Fortunately, the kit includes both entire sets of parts, so that I could install the other set without things turning into a total disaster. The only part I needed to fabricate was the single exhaust pipe rather than multiple exhausts intended for this version of the aircraft. Be careful when you get to this stage and be sure to check the part numbers carefully to avoid my mistake.

Speaking of the engine panels, this section is composed of more than half a dozen parts, all of which have to be fit very carefully so as not to throw off the entire front end of the fuselage. Even with my best efforts I needed a little putty to smooth things out appropriately.

At this point you’ll be facing the rigging of this model, which can be performed in a wide variety of ways. Personally, I found drilling holes in the appropriate locations, then feeding lines through the wings and clipping and sanding after the fact to be the simplest way to complete this. This kit requires about as much rigging as the average World War One aircraft, so be prepared to be patient. Because of my pre-drilling, I managed to accomplish this stage in about an hour and a half. Unlike ICM’s Gloster Gladiator model which I’d previously made, the schematics do not offer quite as good a view of the rigging locations, which made puzzling out some of the details a bit more challenging. I referenced the box art when things got fuzzy, so I’m pretty sure I didn’t miss anything.

Although there is certainly a wide range of interesting color schemes for this aircraft, I chose the comparatively bland box art depiction, as I thought it best represented the most typical appearance of these machines in their training role. Even so, I think the final piece is interesting enough, especially with the decals adding a splash of color. The decals laid down very well with little to no silvering, although you will need to locate a set of small swastikas for the tail, as none are included.

The figures: As mentioned before, this kit comes with a set of figures which include a cadet completing his parachute harness with the assistance of a couple of ground personnel. All figures are in a robust 1/32nd scale and all are wearing some version of the same zippered overalls. Because of the nature of the build, putty will be needed to smooth out the seams in the overalls. Be aware that the part numbers on the instructions are not entirely accurate, so test fit before gluing. The cadet pilot figure comes with a host of straps and certainly does a good job of depicting the complexity of the parachute harness. A little patience is required to get all the strap parts in their proper positions.

Although the outfits depicted require only a limited pallet, you’ll find plenty of small details to paint. I particularly liked the challenge of the parachute harness, which gave me a LOT of detail to add on. My pictures, alas, don’t do them justice, but they really are quite nice when done. Altogether, this set works together very well indeed and will look good in any aircraft dio of your choice.

All in all, this is an excellent reproduction of this essential trainer aircraft as well as a faithful representation of the men who worked and flew it. Together, they are terrific value for the money and make a really nice addition to any good Luftwaffe collection. I’m delighted with both kits and thoroughly enjoyed the build, even when I was screwing up. My heartfelt thanks to IPMS/USA for a chance to build this set as well as to ICM for continuing to provide fascinating additions to the world of 1/32nd scale aircraft models. Be safe, everyone, and happy modeling!

All together
Previous Next