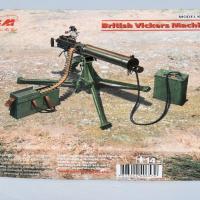 ICM has released a kit of a Vickers Machine Gun in 35th scale. The kit includes 21 parts, and that includes two versions of the body of the machine gun. One version has the water jacket molded onto the barrel cylinder, and the other version does not have the water jacket in place. An ammo can, consisting of three parts, is included. The lid on the ammo can is molded in the open position so that the ammo belt attached to the machine gun can then have its other end attached to the ammo inside the ammo can, giving the finished project the appearance of being loaded and ready for use. If one is using the barrel with the water jacket, there is a container representing the water can that consists of 5 parts. There is no “hose” part to connect the water container to the water jacket. The lack of a water hose is not a problem. That part can be made by stretching sprue, allowing the builder the flexibility to place the water container and gun as desired when building a diorama. Also, there is a choice of tripods. Both tripods are molded as a single piece. (Thanks, ICM!!), with one tripod (part 5) being fully raised and ready for action, and the other tripod (part 8) in the collapsed position.

The parts are clean, with very little flash or mold marks. The “fit” is quite good as well. The only sanding I found necessary was to clean up the gate residue. Assembly was easy, even though some of the parts are quite small. Total work time was about 2 hours, and most of that was getting the paint ready to apply and then actually applying it. If one were to assemble the machine gun without painting it the job could be completed in under an hour.

Please note that the stone walls and ground cover in the accompanying photographs are NOT included in the kit. They are present only to provide scale and perspective.

This kit is highly recommended for the quality of molding, easy-to-follow instructions, very sturdy box, and reasonable kit price. Thanks to ICM for providing this item to IPMS-USA for review.