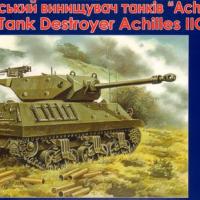 The Achilles IIC is the British version of the M10 tank destroyer (TD). It was based on the M4 Sherman chassis and mounted the 17 pounder anti-tank gun.

The kit is molded in a medium green styrene with some minor flash and a few sink marks, though nothing that isn’t easily removed or fixed. If I counted correctly, the kit contains 339 parts. Yes, 339. In 1/72 scale. The good news is that a lot of the parts are for the tracks, not all parts are used, and there are some useful parts left over to detail other kits. The attachment points are a bit larger than some other manufactures, but can be cleaned up with a bit of work. The tracks are link-and-length. I did a bit of research and found that some earlier UM Sherman kits had incorrect road wheels (six spokes instead of five) and the track was too narrow. It seems they fixed the road wheels, but apparently didn’t fix the track. I don’t think it’s too narrow by very much, though.

The kit goes together very well, requiring very little filler. Most of the detail is very nice, with a very completely furnished turret. There are also parts to build the driver’s compartment, but the hatches are molded closed, so you really can’t see anything of it. I put in enough of the parts that would show through the open-top turret. The gun used in the Achilles is the British 17-pounder, the same as that used in the Firefly version of the Sherman. The ammunition supplied with the kit appears to be the normal ammo storage tubes and individual rounds for the 3” gun used in the M10. The Achilles rounds stored in the turret were not kept in the storage tubes, but were racked individually. I left them off and will replace them if I can find some 17-pounder rounds. The brush guards around the headlights are photoetch, as are the track return skids on the suspension, giving a very scale appearance to these parts. Unfortunately, there are no brush guards for the periscopes. I found the template for the bend on the headlight guards fairly easily in the parts layout in the instructions but I didn’t find the one for the return skids for quite some time. Probably just an error on my part, but the instructions are a bit crowded. Once I found the template, the skids bent perfectly and really look the part when added. The tracks were my first experience with link-and-length. Therefore, I’ll put the necessity to shorten one link on one side down to my inexperience. The tools are molded onto the aft deck of the hull, but are still relatively easy to paint up. The engine cover grills are nicely detailed and fit well.

The M10 was initially designed to have stand-off armor, similar to the shurzen on German tanks. In the event, none ever went into the field with the armor, but the mounts for it was still added to many of the TD. Later versions did not have the stand-offs or had them removed in the field, according to pictures I’ve seen. Therefore, I left them off, saving myself a good bit of work making the standoffs supplied with the kit usable. They are approximately 2-3 mm across and have four attachment points. Some research I did told me that Egypt had around a dozen Achilles when war in the Middle East broke out in 1948. Since that’s where my interest in armor lies, I decided to paint my Achilles as an Egyptian vehicle. I used a mixture of sandy colors to get what I felt was a suitably faded version of Egyptian sand. I used Archer ruboff Arabic characters and numbered mine as number 3. I did washes of acrylics using sepia and a mix of brown and dark grey with a bit of streaking on the hull and turret sides. I did a fair amount of chipping of the paint using enamel German chocolate brown and added fresh wear with a Beryl metallic steel pencil. I airbrushed very thin black, grey, and smoke into the exhaust area at the rear of the TD. Naturally, after I had completed the painting and weathering, I found that current wisdom says the Egyptians really didn’t have any Achilles after all. Oh, well.

The kit decals are for three tanks, one from a Polish unit in Italy, one from a Canadian unit in the Netherlands, and one from a British Royal Artillery unit in “Northwest Europe.” They are slightly matte. Since I didn’t use the kit decals, I tested one on a hulk I have for that purpose. The decal separated relatively easily from the paper and held together well. Be careful where you place it, because it wants to stay where you put it. You can move it if you have plenty of water underneath it. It adheres well after the water is removed and snuggles down pretty well on its own. It reacts well with mild decal setting solutions.

All in all, the kit was a relatively easy build except for the pats cleanup of the small parts. The detail is very good, and the kit supplies parts for both the M10 and the Achilles, with the exception of the 17-pounder rounds. If the difference in appearance doesn’t bother you, there are sufficient 3” rounds in the kit to adequately fit out the turret. I enjoyed the build and learned quite a bit about assembling link-and-length tracks in the process. If I were to build another or an M10, I’d probably try to find a metal barrel to replace the kit one, if only to be able to skip the ‘drill out the barrel’ process. Recommended as among the best detailed M10 family available in 1/72, just not for a beginner.

My thanks to Hobbyterra and UM Models for supplying the kit and to IPMS/USA for the opportunity to build it.