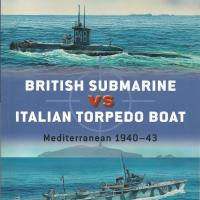 This book follows the typical format of the series including a few chapters on the technical aspects of each vessel, the training of the combatants, the strategic situation, a very detailed narrative of combat, and wraps it up with statistics and analysis.

I have to say that I have found the reading of this book very interesting and I was surprised by how many references –to other books or interviews- this issue of Osprey Duel has. It is clearly an extremely well researched book and some of the main things I learned follow:

At some extent, this was a “Battle of the Atlantic” scenario, with the roles reversed. The British Navy was the hunter, and the Axis forces were the defenders of convoys. Some differences relate to the size of the convoys themselves, with only a few freighters and perhaps only two escorts. The reason for having such a small convoys was because the African ports could only handle a few ships at the time.

The Mediterranean Sea has its own challenges for combat. Due to the influx of water from the Red Sea and Atlantic, very pronounced temperature layers that would last for a few months would allow the submarines to hide from ASDIC between the layers. This seasonal effect in the water implied that the subs would become more active –and effective- during those months, which had a significant impact on the overall amount of supplies being shipped and the ground combat in the desert.

As said before, this book is excellently well researched, has plenty of period pictures and many color profiles, plus it has two really nice full-color commissioned artworks to illustrate some specific combat situations.