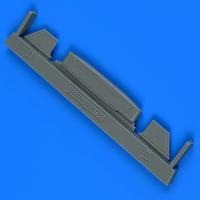 The United Kingdom bought versions based on the U.S. Navy's F-4J for use with the Royal Air Force and the Royal Navy's Fleet Air Arm. The UK was the only country outside the United States to operate the Phantom at sea, launching them from HMS Ark Royal. The main differences were the use of the British Rolls-Royce Spey engines and of British-made avionics. The RN and RAF versions were given the designation F-4K and F-4M respectively, and entered service with the British military aircraft designations Phantom FG.1 (fighter/ground attack) and Phantom FGR.2 (fighter/ground attack/reconnaissance).

This aftermarket set has three antennae cast onto a single resin block. Included is the retrofit fairing for the Marconi ARI 18228 Radar Warning Receiver which required the white navigation light to be relocated to the drag chute door (not included with this set). Also included are two wing antennae to be mounted on opposite sides of the vertical stabilizer.

The resin parts offer finer detail than the kit parts and are direct replacements as no cutting or modifications to the kit parts being required. This set is designed for either the Hasegawa or Revell kits. The casting block also notes "R" and "L" designations for the two-wing antenna. These two parts are much thinner in section than the kit plastic parts.

It took me less than five minutes to prepare the resin parts for placement on the kit. The Hasegawa kit has two square openings on the top of the vertical stabilizer that receive the two pegs on the kit part, and the two blade antennae require the drilling of small openings on opposite sides of the vertical stabilizer for placing the two antennae. The resin parts have flat mounting surfaces with no locator pegs provided. The antenna on the top of the stabilizer should be fitted first, then the side antenna next depending on the paint scheme and markings. The attached images show the resin parts temporarily fitted in place with white glue.

When I am ready to build the Hasegawa kit, I plan to drill openings in the bottom of the top fairing that match the openings on the top of the fin and insert short lengths of brass tubing for a secure attachment to the top of the stabilizer. It appears than some filler may be required between the resin and plastic to fill any gaps that may result from the fit. The two-blade antenna can be attached to the sides of the vertical stabilizer covering the openings required to mount the kit parts.

This resin set offers finer detail than included in the kit parts and is recommended for an upgrade to the Hasegawa or Revell kit. These parts represent a small enhancement of the kit, but are well worth the cost and effort.

I wish to thank Quickboost and IPMS/USA for the opportunity to review this set.

Also, my thanks to Wikipedia for their help with the background information as well as The Phantom Phacts website. The latter source offers some outstanding images and information for this topic.

7 Resin Parts in place
Previous Next