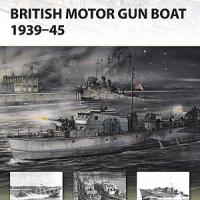 Most of you have heard of PT Boats, E-Boats, and MTBs. There have been movies, books, and some good models of these boats. But a class that doesn’t get that much attention is the British Motor Gun Boats or MGBs. This 48 page soft-cover book starts with the development of these craft. The Motor Torpedo Boats did not have the firepower to take on their German cousins, so the initial thought was to remove the torpedo tubes and add heavier weapons. Later, boats made specifically as MGBs were created and finally, some of these were rearmed with torpedos by the end of the war, making a full circle.

The book does a fair job describing the types of boats used up to the Fairmile Type D, which was a much more capable, seaworthy vessel, able to hold its own against the E-boats. One of the very interesting things I learned is that the Fairmile Marine Company adapted the traditional boat building idea into a prefabricated design where the pieces could be built all over the world by non-boat builders, working from a set of plans. The prefabricated parts were then shipped to the final assembly site and the boat was finished there. The normal armaments are also covered with some pictures but I would have liked to have seen some clearer views, or maybe drawings. Two of the more interesting weapons were a twin 20mm Oerlikon turret and an automatic 6-pdr.

Besides the pictures, there are 8 color profiles and a nice two page cutaway of the Farimile D Type. A couple of color action painting are included, with the one on the cover being repeated inside, showing a craft in action during the St. Nazaire Raid. There are only a couple of "in action" stories included and this left me wanting much more. This is the one place where I think less information regarding the different boat specifications and more history would have helped but overall, they do a nice job describing a large subject.

Thanks to Osprey for the review sample.