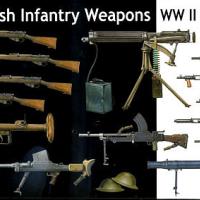 This kit from Master Box features an assortment of weapons used by Commonwealth troops during the Second World War. This is a welcome addition to the 1/35th arsenal, since some of these weapons are rarely, if ever, offered in this scale. The box contains one sprue of 40 gray plastic parts wrapped in a really large plastic bag. 15 weapons and 6 helmets are included.

Assembly is quick and simple; a couple of the weapons need bipods added. The standout piece is the Vickers mounted on a tripod, and you have a choice of two tripod mounts (one is taller), and the ammo box can be built open or closed. I recommend using a piece of brass scrap for the water can handle (part 11) since the part is too thick. The Vickers builds up nice right out of the box. I drilled holes in the barrel and the water can, and used a length of thin solder for the rubber hose. If you are using the ammo belt, cut a small tab from paper or brass and use this as the leader tab for the machine gun belt, as shown in the box art.

Most of the weapons are really nicely detailed. The revolver is so small, I didn’t remove it from the sprue because I figured it would just get lost. It is a tiny jewel; I’m saving this for the right figure or diorama. The Lewis machine gun is really nice as well, and is something rarely seen. The Enfield rifles will be very useful to figure and armor modelers – the Mk. III SMLE (Short Magazine Lee-Enfield) was the standard British infantry rifle from 1907, and was used up to the Korean War by the Australians, so lots of modeling potential there. The SMLE’s replacement, the No. 4 rifle, is also a well-done little weapon and the spike bayonet is a great addition.

Six Brodie tin hats are included, three with rivets on top and 3 without. I have never seen one of these helmets without the rivet, which holds the liner in place, including U.S. helmets, so I’m a little baffled by them. These style helmets are common in 1/35th; it would have been nice if Master Box had done something different, such as include a liner, so the helmets could be displayed resting upside down or held in a soldier’s hand. Better yet – why not include helmets we rarely see – the late war Turtle-style helmet, or a Paratrooper version, or helmets with camo nets on them? I painted the helmets, but left them on the sprue.

The five Sten light submachine guns are somewhat of a mixed bag. Detail on these is excellent; the Mk. II with its tube stock is a beautiful piece. The two variants of the Mk. V, with wooden stocks and pistol grips, are probably the first ones done in 1/35th. The two Mk. III Stens have a problem. These weapons had skeletal wire stocks, but Master Box has chosen to mold these solid, even with today’s molding techniques. I would rather have seen the wire stocks molded too thick than filled in. I left these two weapons on the sprue for now. The only way I can see them being used is by sawing off the stock and making a replacement out of thin copper wire.

The PIAT (Projector, Infantry, Anti-Tank), also has issues. This anti-tank weapon was not rocket powered like the bazooka; instead, the projectile was laid in a trough, and a spring loaded plunger ignited a propellant, firing the projectile. It was a terrible weapon to use, with a fearsome recoil, difficult to cock, and heavy. A PIAT in this scale is needed, since only two have been issued in plastic kits – a 1970’s ESCI version and one in recent years by Dragon. Both had separate projectiles and hollowed trays. Unfortunately, the Master Box version in this kit is molded with the projectile in the trough, and the top is molded flat with no detail. I cannot see this piece being of any use without extensive modification.

Forget the simplified painting guide, use the box art or a color photo from a book, or the internet. For painting, I used dark brown for the four rifles, and picked out metal details in black. For the other weapons, mostly of steel, I mixed silver with flat black for the base color, then a wash of black and a light drybrush of silver. The PIAT, Vickers tripod, and ammo box are painted dark khaki. Details such as the fore-barrel of the Bren gun (which was bright silver) and the brass hose connection on the Vickers were picked out. The ammo belt was green cloth with brass cartridges and copper bullets.

While there are a couple of poorly done pieces, there are still some gems in the kit, so it is worth picking up if you need some of these items for a diorama. I also think Master Box could have added more weapons and accessories in the box.

Still on the sprue