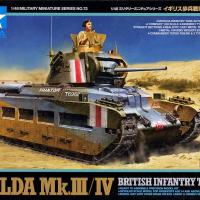 A few years ago, Tamiya released an all new 1/35th scale version of the Matilda Mk.III/IV, having produced an earlier kit of this venerable British tank back in the 1970’s. Those who build in 1/48th scale hoped that eventually Tamiya would downsize their new 35th kit and allow the modeler to have an alternative to the 35-year old Bandai 48th scale Matilda, which was selling on the collectors circuit for upwards of $100. Tamiya has kindly obliged!

The kit comes molded in Tamiya’s standard tan colored plastic, and the quality of the parts is night vs. day compared with the old Bandai kit. In all areas, the detailing on the Tamiya kit is crisper and more refined than the old Bandai version. Of particular note are Tamiya’s now standard “link and length” tracks, a true godsend compared to the miserable Bandai “rubber band” style of track, which was poorly detailed, hard to install, and which paint simply wouldn’t stick to. Contrast this to Tamiya’s tracks, which are highly detailed for the scale, glue together easily with standard hobby cement, fit perfectly, and accept paint like all the other parts in the kit!

Construction of this model is simplicity itself. The instructions, unlike those of certain competitors, are easy to follow and basically foolproof. The parts are well detailed, crisply molded, and I only found a couple of ejection pin marks that need taking care of – parts C4, in instruction Section 19. For those wanting to build the model out of the box, the kit can be assembled in ten hours or less.

The “problem” with this kit comes if the modeler wishes to produce a historically accurate version of the Matilda. The 48th scale kit, like its 35th scale predecessor, is an amalgam of Mark III and Mark IV characteristics. Decal option “A” in both scales is for a vehicle named “Phantom” from the 42nd Royal Tank Regiment during “Operation Crusader”, North Africa, 1941. This particular vehicle was an earlier version of the Matilda than is depicted in the Tamiya kit. The earlier version of the Matilda had a different casting around the driver’s visor, part C5, Section 14 in the kit. Using photos, the modeler will need to alter this area for complete accuracy.

Other areas of inaccuracy concern the turret, instructions Section 19. Parts P1 are Bren gun ammunition bins and should be deleted from “Phantom”. The kit also comes with the later style of rear hull auxiliary fuel tank, Section 10, parts A6/C25/C39. Also, Section 13, parts A21, and Section 15. Photo references indicate this was not in common use during “Operation Crusader.” In its place on the rear hull would most likely have been a “POW” rack which was used to carry “flimsy” cans of petrol, oil and water. Such a rack can be fairly easily fashioned by finding some good reference shots off the internet, and some Everygreen strip plastic. The Czech firm Hauler produces the flimsy cans themselves in 1/48th scale.

The second scheme offered by Tamiya in their color and marking guide is option “B,” which is for a vehicle named “Defiance.” Research indicates this was from 4th Royal Tank Regiment in North Africa, 1941. So this, too, would be an earlier vehicle than that depicted in the Tamiya kit, and so the modeler would need to incorporate the changes listed above for “Phantom” to have a more accurate model. Additionally, Tamiya got the wrong War Department number for “Defiance”, listing it as T6949, but it should be T6849.

Then, one comes to the paint schemes in option A and B. This is the so called Caunter three color scheme (Light Stone BS61 or Portland Stone BS64, together with Slate and Silver-Grey). However, research indicates that there wasn’t simply one such scheme, as Tamiya’s painting instructions suggest, but THREE such Caunter schemes. This from research done by renowned color and marking expert Mike Starmer. Mr. Starmer produces an excellent series of WW2 British Color and Markings reference books, one of which is devoted solely to the various Caunter schemes. Thus the modeler needs to find photos of the relevant vehicle and carefully examine them to determine which of the three Caunter schemes was utilized for the specific vehicle being modeled!

Tamiya then offers the modeler a third color and marking scheme in their kit, Option C. This is for a vehicle listed as being from the 49th Royal Tank Regiment, “England 1942,” and which shows it painted in a two-tone brown scheme. Given the later date, this perhaps is a vehicle that can be built accurately straight from the box, but unfortunately I am unable to confirm this as my research isn’t wide ranging enough.

The model as built by me for this review takes some of the information above into account, but ignores other bits! I built the model out of the box, except for deleting the Bren gun ammo bins and the auxiliary fuel tank. This allowed for a “reasonably accurate” profile. However, the thought of a 3-tone Caunter scheme was a tad daunting for me, while at the same time I loved the bright markings of “Phantom.” So I painted my model in Light Stone BS61 (White Ensign enamel range of paint), the color of North African Matildas prior to the introduction of the 3 tone Caunter scheme! So sue me……..

To conclude: Tamiya’s new 1/48th scale Matilda is a wonderfully easy kit to build. It is, however, a mixture of variants, and thus the modeler can’t build color and marking options “A” or “B” out of the box. However, with a little research together with a little scratchbuilding work, those interested in more accurate models shouldn’t find it too difficult to “upgrade” the kit. My sincere thanks to TamiyaUSA and IPMS USA for allowing me to review this kit.