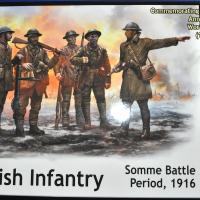 Master Box has joined the parade of World War One subjects, commemorating the centennial of the Great War, by providing this set of British Infantry from the time around the Battle of the Somme in 1916. During these centennial years of the Great War (1914 -1918), we are seeing numerous WWI subjects especially aircraft and armor hit the market in record numbers. Aerodrome ground crews, tank crews and infantry will provide modelers with the opportunity to create some dynamic dioramas of this important conflict.

The Master Box kit states, in fact, that it is “Commemorating the 100th Anniversary of World War One (1914-1918)” and does so with an impressive box art illustration by A. Varavin, and the actual sculpting of the figures by A. Gagarin. There is no set of instructions inside the box, as the assembly instructions as well as a paint guide are provided on the back of the box. The painting guide chart references only Vallejo and Lifecolor paint numbers, but the box does show the actual paint color intended and so you can match any of the paints you may be using to that general color.

The kit is comprised of two sprues of light beige styrene plastic totaling 80 pieces (Sprue A contains 64 pieces and Sprue B contains 16). A total of five soldiers are to be assembled and the back of the box has a profile of each, front and back. Having both the front and back view is very helpful. The figures have exceptional detail and there is no flashing that needs to be cleaned up. There are some very minor seams that need to be cleaned up, especially on the legs front and back, and on the boots and shoes. There are also seams on either side of the head, just below the ears that will need to be shaved off. Be careful that you do not delete the helmet straps that are molded onto the head and face of each figure. On some of the soldier’s arms there are two pin-like circular nubs that will need to be shaved off. I thought the hands actually have the best detail, while the critical face detail, although not exceptional, is very good.

The strength of this kit is that all five figures are similar yet distinctly different. The Officer is wearing a great coat and has on his jodhpurs and boots. He is also carrying a side arm and a swagger stick (walking stick). The four battle weary soldiers are all posed differently, yet each one is wearing a jerkin, with the vest either buttoned up or hanging open. Each has various other packs and gear - bayonets, scabbards, and shovel handles. Two are sporting puttees and two have their trousers loose. The box art conveys a compelling scene of having survived another day on the Somme battlefield, yet their faces show the fatigue and the futility of following the Officer’s direction for another assault.

The sprue numbers of each part are clearly marked, both on the sprue and the adjoining placement on the figure. I did discover, however, that there was one misidentification involving two parts – A32 and A33. On the sprue, A32 is a bayonet pack and A33 is a helmet, but on the figure, the helmet is listed as A32, and the pack as A33. This is not really a big deal, as you cannot mess up these two parts regardless of the misidentification.

All the body parts and equipment go together without any major fit problems. Master Box has done a fine job in aligning everything and the fit of all the parts is really good. I only encountered two slight misalignment issues – where B11 attaches to B5 (side vest to torso) and again with B8, where the pouch straps need to be fiddled with to get them aligned with the adjoining straps on the torso. A hint here when you add the torso to the hips and legs assembly, is to make sure you align the belt and straps as they appear on the back of each figure. These straps are clearly defined and when you get them aligned in the back, you will be assured that the torso is in the right position.

Overall the fit is good, as I mentioned above, and you will need just a bit of putty here and there to fix some areas. On all four figures with the leather Jerkin vest, the pieces below the belt are separate and so there is a considerable gap when they are joined together. You will have the urge to fill this gap immediately with putty, but hold off. You will be adding numerous packs and bags, etc, and I found that these covered the majority of the gaps in the side vest area and no putty would be necessary. Obviously, wait until you have assembled each figure before you decide what areas need some putty touch up.

The kit comes with some armament for the soldiers, three rifles (two with bayonets attached), and a Lewis gun, which is being held straight up by the veteran of the group. There are also two side arms in their holster, one of which is for the officer. The officer is also carrying a swagger stick. The only thing lacking here is the necessary strapping for the rifles. This will be a must, as one soldier actually has his rifle slung over his shoulder. I decided to create the three rifle straps with foil. Part A56 is an ammo belt for one of the figures, but I found it to be a bit too bulky to fit under his arm and still have the arm match its joint probably. I decided to move it more to the back of the figure, but then it was a bit too curved to fit properly there until I flattened and shaped it to fit better.

Once assembled, each figure was sprayed with Tamiya Fine Grey Primer. I decided to leave the helmets off as this would allow easier access to the face and head painting. I drilled a hole in one heel on each figure and inserted a rod. This allowed me to clip onto the rod during painting, and will also serve as the attachment pin when these figures are mounted on a diorama base.

Painting began with the all-important head and face area. A little off-white was painted in each eye socket and followed by a touch of black to show the pupil. Each face received a base coat of Vallejo Basic Skin tone (70815), and that was followed by a highlighting coat of Vallejo Beige Red (70804). I determined to make my soldiers look like they just survived the battle of the Somme and the horrific conditions of trench fighting in WWI’s no-man’s land. That meant a lot of grime and dirt and powder and sweat, etc. To accomplish this I further highlighted each face (including the officer) with washes of Vallejo Flat Earth (70983) and Flat black (70950). Later I would also brush in some brown and black pigment powders (by Doc O’Brien).

Vallejo makes a color called English Uniform (70721), and so this was used for the uniforms base coat. The Officer’s full length leather coat was a mixture of English Uniform and Grey Beige. The four soldiers all have a leather vest over their basic uniform, and the vest color consisted of a base coat of Vallejo Mahogany (70846) and an overcoat highlight of Vallejo Red Leather (70818). Boots and shoes were done in a black with brown mixed in. A very light touch of Vallejo Brass was used on the shoelace eyelets and the Officer’s stirrups. A small spot of Brass was also touched upon the buttons of the Officer’s coat.

The helmets were painted separately, once again using English Uniform. However to create the metal look needed for the helmets, I rubbed in graphite with my bare finger to create the burnished look which is so effective in replicating metal, but also suggesting a weathered dirty look. I was pleased with the way the helmets turned out and once completed, they were glued on each figure with some Gator Glue.

A coat of Testors Dullcoat was airbrushed lightly over all the figures, avoiding the helmets as much as possible as I wanted the metal helmets to be a little shinier than the rest of the figure. A final weathering of black wash, followed by pigment powders provided the final touch. Once again, I wanted these men to look like they have been in the mud and dirt of No-Man’s land, so I used numerous shades of pigments to dirty up the pants and shoes and even the sleeves and elbows (where if they had to get into a prone position, their elbows and sleeves would be dirty as a result).

Even with the flat coat and then the dry pigments, I noticed that the photos seem to show the uniforms and faces appearing too shiny. That is the result of the camera’s flash, of course, and in real life, they do not look as shiny.

I threw together a simple base to mount them on for the purpose of this review, but I have a plan to add them to a diorama I will create, pairing them up with a British Mk.A Whippet tank. That I will leave for another day.

I recommend these fine figures from Master Box, as they will add a significant touch of realism with any Great War diorama you may be constructing. I would like to thank both Master Box Models and also IPMS/USA for the opportunity to build and review this kit.

Soldier with Lewis Gun, back

Soldier with slung rifle, back

Soldier with basket, back

Soldier with rifle on shoulder

Soldier with rifle on shoulder, back