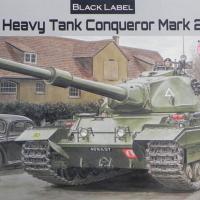 This is the British Heavy Tank Conqueror Mark 2, heavy tank design featuring a 120mm main gun. Developed specifically as a response to the Soviet IS-3 tank, it was envisaged as a partner for the British Army’s mainstream and contemporary Centurion (armed with a smaller 20-pdr gun) tank so it could give a long-range anti-tank reach. A total of 20 Conqueror Mk.I and 165 Conqueror Mk.II tanks were produced from 1955-59, and they were allocated to tank regiments stationed in Germany.

Step 2 builds sub-assemblies of the front and rear hull plates, builders should note that the gun support crutch calls out a part number A42 when in fact it should call out B42.

Step 3 assembles the suspension system to the lower hull and here you need to be careful as the instructions are not that clear. Also pay particular attention when installing the parts C5 as these are crucial to the correct fitting of the skirts later.

Step 4 completes he suspension and the wheels etc. Then you need to install the skirt support arms C18 & C40, these need to be installed correctly. The instructions do not call for the skirts to be installed until the last step (19) but I found that they can be installed after step 4 which allows for any corrections and alignments to be made to the support arms. The tracks can be threaded on later, even with the skirt installed.

Steps 6, 7, 8 and 9 adds details to the hull and again not real issues except one part number is incorrect the rear view mirror is shown as C20 and should be B20. Also attached at this stage are the very details exhaust system which are the fully in closed so the fine detail is not seen.

Step 10 adds more hull details and the tracks which, as I mentioned earlier, I thread through as I had already attached the skirts.

Now for steps 12 to 18 which assembly the highly detailed and impressive turret. The only item I found disappointing is the gun barrel which is molded in two halves, even though the box states the gun is a one piece molding. ,The multi-piece stowage rack goes together very well and looks great when finished.

The last step, 19 is the installation and assembly of the skirts which as I mentioned before was better done after step 4.

Overall I found this kit enjoyable and builds into an impressive representation of the Conqueror. I had read a few reviews that point out many errors in the detail and measurements of the kit which are correct but do not distracted from this super kit. The only thing I would suggest could improve this kit would be a one piece gun and a photo etch set.

Thanks to Dragon and Dragon USA for providing this review kit, and to IPMS/USA for letting me doe the review.