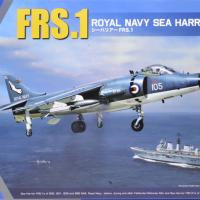 First: Sincere thanks to Lucky Model for sending us this most excellent kit, and thanks also to IPMS USA leadership for once again believing in my ability to deliver within a deadline….

OK so almost to the year I have the FRS 1 kit in hand; it really is great to have a new, accurate and easy to build Sea Harrier (SHAR) on hand. Let’s begin…

The basic kit is the same as the FR 2; in the box, there are more external stores, and a decal sheet to be savored. If you really want to build every SHAR you have the decals to do it. Check out the scan… Cartograf manufactured, CROSSDELTA designed. VERY WELL DONE!

Like last year, it was pleasant to have minimal aftermarket to deal with and have a great result. This time, instead of metal gear, I found a Martin Baker Mk 10 seat appropriate for the SHAR, and did the slight modifications to fit. The basic cockpit is more than sufficient for a closed canopy, but the resin seat sealed the deal.

The basic kit is comprised of just over 270 parts in Gray styrene and clear. All surfaces are detailed with fine recessed lines and appropriate levels of rivet/screw holes. There is one fret of Photoetch with external detail parts.

Kit breakdown pretty well follows that of the actual aircraft; the well-appointed cockpit provides provision for the instrument fit; in this case I used the later version with the Multi-Function display. Same as last time,but unlike the updated SHAR, you will use the old round-dial and single LCD (Liquid Crystal Display) panel. Hard to believe technology changed so much in 33 years, but it did. (Here’s perpective for you: The Spitfire flew almost 30 years after the Wright Brothers, so I guess technological advances have slowed down).

The tub itself consists of the lower floor with throttle/nozzle handle and panel details, to which you add rudder pedals and the control column. Careful painting results in a positive appearance. The aft bulkhead is well detailed, as is the Martin-Baker Mk 10 ejection seat. The Kit seat is a basic, properly-shaped item, only requiring application of a harness to improve the appearance. As noted before, I upgraded…

The instructions have you begin with the engine intake bell and fan assembly, which is then attached to the duct liner/forward wheel well box. The intake duct/bell had been previously painted flat white; the fan was painted Tamiya aluminum, which was subsequently pin-washed to bring out the depth. The previously assembled cockpit is then added to this structure; Don’t “hard glue” these together, as when you put them in the fuselage there are locating recesses for everything to fit into… and the fuselage sides will not fit together if you are not careful.

The kit includes four bearing mounts for the exhaust nozzles which are installed from the inside of the fuselage halves; these are tied to two arms and a connecting rod so they can be made to operate between hover and forward flight positions.

The aft wheel well assembly is made up of five separate wall parts; fit is positive. This is added to one of the fuselage sides… as is the speed-brake well just aft of it. As noted last year, one last little details included the forward right light installed from the interior of the right nose; and I’ll just use Microscale clear when the model is complete.

Installing the intakes was the next step. The kit has two types of auxiliary intake rings with partial doors open (engine not running on the ground) or all doors closed (In flight scenario). These fit positively into place; you can get the in backward, but that will be because you are not paying attention, and you will wonder why the fit stinks. Follow the pictures! Once installed, the fit is positive and tight.

The wing assembly was next; one-piece upper (which set the annhedral on the wing) and single lower wing sections. Simple and effective, all fits on the now-assembled fuselage. Detail such as the wing “puffer” nozzles and interior of the outrigger wheel wells was extremely well done. This was also noted on the tail “Stinger” for that pitch control jet as well…

At this time I addressed the four small leading edge fence strakes; these are provided as Photoetch on a small fret in the kit. This is the same fret as on the “Mod 2” SHAR kit, but not all strakes appear to be needed. Also included are “Christmas tree” stiffeners, which are late-model additions and not used on the FRS 1 as far as I am aware. They are thin and fragile… and I resorted to using my Scale Aircraft Modeling ruler saw to cut a slot to provide more surface for them to fit into; they would prove to fly off otherwise. The wing has scribed marking where these fences go, so it wasn’t a problem to cut the slots. Tweezers and superglue; wahoo! They look great when finished.

All control surfaces are separate; flaps, ailerons, rudder, and stabilators. The latter had separate root “stiffening” plates, which have been missing in some earlier SHAR kits… an excellent detail touch. There were no fit issues with these surfaces; I found them to be a nice addition, as flaps are frequently down when the aircraft is configured for hover/vertical takeoff and landing and the Stabilator tends to be “non-neutral”.

External stores pylons options abound; the standard four pylons are two-part items with separate sway braces; small and large external tank options are provided, along with two Sea Eagle missiles… Four AIM-120 AARAAM, and Six AIM-9L/M Sidewinder missiles are provided; The option of dual Sidewinders for the outside pylons, along with rails, are included as well. Two belly-mounted 30mm Gun pods are also provided, as are the strake rails if you do not mount the gun pods.

At this point I snapped the nozzles into place; these are slide molded, and fit perfectly with external stiffener detail not seen on others kit’s nozzles.

Antenna fit is catered for over the entire aircraft; take your time and the kit plastic items will be durable enough to handle the stress of display and movement. By the way, this includes the Air refueling probe (which I opted not to use).

The kit landing gear consisted of two halves for the forward gear, the aft main gear, and two outriggers with actuators and doors integrated as one item. Again, SAC gear replaced these. The kit wheels and tires consist of one-piece hubs, which are painted white and trapped between two tire halves. This actually worked well; My recommendation is to make sure all mold gate residue is removed before you attempt to put them all together.

Painting was simple; I installed the clear forward canopy section, used some Vallejo filler to blend it in, masked the clear, and sprayed the frame flat black. I then shot the whole model with Tamiya fine primer to make sure I had not missed any seams. The main canopy frame was carefully cemented to the sliding frame after it had been painted flat black, then masked. I originally painted the nose radar radome flat black, masked, then painted the rest of the model with Tamiya Gunship gray 2 rattle can spray, which approximates Dark Sea gray. I was going to do Sharky Ward’s bird in Extra Dark Sea Gray but changed my mind, as I’m going to do a second kit and try to upgrade the interior a bit. (I have the Robert Taylor Painting of his SHAR shooting down a Mirage with an AIM-9; the print was purchased at RNAS Yeovilton with his signature on it for a very low price at the time. I bought it way back in spring 1986 when I visited that museum. The gracious Mrs. Broadwater, wife of another famous SHAR pilot, had previously set me up to photograph the interior of “HUMPHREY”, the famous Wessex. (a license built turbine version of the Sikorski H-34; this helicopter was noted for having depth-charge attacked a former USN submarine purchased by Argentina, causing it to be damaged and out of the war. A US-design helicopter attacking a US design submarine in a war between Britain and Argentina. How strange)

This was all because I bothered to politely ask on the telephone if I could have access… At the time I was not so aware of how much history was under my feet… ah, youth…

Anyway, I chose a 1983 marked bird from the instructions; Testors gloss before decals, (Boyd “Wet look”) and then… on to final finish.

CARTOGRAF DECALS! These worked great! I had no silvering at all, and they were durable, color saturated, and stayed where I put them (but could be moved as necessary without balling up or tearing!) The only problem I had was some decals did not want to stick after dry, but a coat of clear fixed that.

Again, this was a comprehensive sheet; included are markings for all FRS 2 in the Royal navy inventory PLUS the Indian Navy. These can be duplicated with what is on the sheet, to include legacy Extra dark Sea Grey over white schemes.

Also included are all markings for the missiles and pylons, and stencils for the airframe. I opted for a generic squadron aircraft. After applying all I felt up to doing (some are REALLY tiny) a bit of Solvaset settled the decals in; let cure/dry, then one more glosscoat and then a dullcoat final finish. I’ll do a bit of sooty weathering later. All Harriers are pretty dirty after a short time… a weathering dream!

The end game was to add all the antennas and things that can break off, or are clear such as the wing lights and anti-collision lights. The pitot tube mount is suspect in design; I have to research it, but I don’t think it sits like the manufacturer designed it; looks like a can with a needle on the front, but I can’t confirm right now. I believe it is faired in… no problem, but…

10 of 10! Lucky Model/Kinetic continues to deliver unexpected, exciting projects. Thanks once again to Lucky Model for providing this marvelous Kinetic kit!