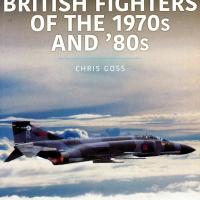 The latest in Key Publishing’s ‘Historic Military Aircraft Series’, this slim volume looks at the McDonnel Douglas Phantom and English Electric Lightning in RAF service during the ‘70s and ‘80s when they were the mainstays of Britain’s air defence commitment.

As explained in the introduction, author Chris Goss inherited the photo collection of noted aviation author and artist David Howley, who many will recall for his colour profile paintings for many modelling and aviation magazines. This book features 180 of Howley’s photos, mainly in colour and mostly of good quality. Most are taken at airshows but there are also some ‘in service’ shots dating from his time as an RAF Warrant Officer.

Both types have their own section and photos are generally two to a page, with comprehensive captioning provided by Goss. Photo reproduction is generally good, though some could have used some contrast adjustment. For the modeller, the book is a good reference for colours and marking, which changed radically over time during the course of the period covered, especially as the captions give lots of useful information.

Overall, this is a neat package that hearkens back to two classic types from a classic era in RAF history. Goss promises more volumes based on the Howley Collection, and I look forward to seeing what lies in store.

I’d like to thank Daniel at Casemate for making possible the review of this book.