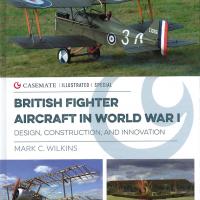 In this follow up to his volume on German aircraft, author Mark Wilkins takes an in-depth look at the concepts, design, and construction of the fighters from five of Britain’s most prominent Great War aircraft manufacturers. This profusely illustrated book uses images taken from manufacturers’ drawings and plans, period photographs and advertisements as well as numerous images of museum and privately built and owned replicas.

The state of the British aircraft industry, such as it was, is described in its initial stages from indifference and reluctant acceptance on the part of mainstream government and army officials, to the enthusiastic, even passionate advocacy on the part of a few parliamentarians and private enthusiasts who eventually created an industry in the span of a few years where none previously existed. Visionary entrepreneurs like Sir George White (The British and Colonial Aeroplane Company, Ltd - “Bristol”), George Holt Thomas (Aircraft Manufacturing Company - “Airco”), Alliott Verdon Roe (A.V. Roe & Company - “Avro”), and Thomas O.M. Sopwith (Sopwith Aviation Company - “Sopwith”) each became enamored with the exploits of early aviators, particularly the French, and came to see Britain’s failure to embrace the airplane as a strategic national mistake. Through their own work or that of their best designers, like the legendary Geoffrey de Havilland, their experimentation and development of aeronautical technology in the early 20th century eventually led the government to establish the Royal Balloon Factory in 1911, soon to be renamed the Royal Aircraft Factory. By the time of the First World War, these five entities would go on to create Britain’s most successful fighters, many of which carried on years after the end of the war. The development of British aircraft engines and propellers is described in the book’s final chapter.

This book follows the same format as the earlier one on German aircraft. Much use is made of contemporary images of replica aircraft, from their construction to some fine aerial photography of the finished craft. The chapters include sidebars highlighting today’s builders of replica aircraft - SE5a, Bristol Scout, Avro 504, Sopwith 1 1/2 Strutter and Sopwith Camel. As with the earlier volume, the text is complimented with ten of artist Ronny Bar’s beautiful profile illustrations.

This book is highly recommended. It is a terrific compliment to Mark Wilkins’ earlier work. One can only hope that a third volume on French aircraft is in the works to complete this outstanding set. My thanks to Casemate Publishers for providing this book for review.