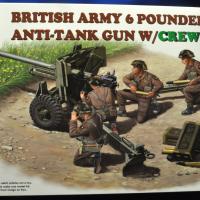 The primary anti-tank gun for British forces during the middle of World War II was the 57 mm Ordnance Quick-Firing 6-pounder, or just 6 pounder. First used in North Africa in the Spring of 1942, it replaced the 2 pounder in the anti-tank role. The United States Army also adopted the 6 pounder as our primary anti-tank gun under the designation 57 mm Gun M1. The 6-pounders were issued to the Royal Artillery anti-tank regiments of infantry and armored divisions in the western theaters, consisting of four batteries with 12 pieces each.

The 6-pounder first saw action in May 1942 in Northern Africa. At the Second Battle of El Alamein the 6-pounder guns of 2nd Battalion, together with the 239 Anti-Tank Battery Royal Artillery, destroyed more than 15 enemy tanks. As the Germans produced much heavier armored tanks, the Tiger I and Panther, the standard 6-pounder shot proved to be ineffective against their front armor. However, they still proved effective on the less armored sides and rear armor. The ineffectiveness of the 6 pounder against the heavily armored Tigers was somewhat improved by the development of more powerful ammunition, in the form of the Armor-Piercing, Composite Rigid (APCR) shot, and the Armor-Piercing, Discarding Sabot (APDS) shot, which was available from 1944 and made it effective in fighting the Tiger I and Panther tanks frontally.

The kit is comprised of four sprues of high grade grey plastic that has very little need of clean up. The plastic parts on sprues A, B and Wa total 172, and sprue Aa-Ad, for the four figures, total 49. There is also one photoetched fret, numbering 33 parts, but in actuality totals 80 brass parts. There are two decal sheets, one for the ordinance markings and the other for the uniform markings of the four crew members. There are two tires which are beautifully molded in black plastic. Finally, there is a 50 cm length of thread to replicate rope.

Sprue A and B which contain the parts to build the gun are a darker plastic. The sprues containing the figures and the ordinance are a lighter, softer grey plastic.

A couple of initial “pluses” is that the gun barrel is molded in one piece, with just a very light seam line to sand off, and as mentioned, the two tires are molded in black rubbery plastic that have great detail, including the Firestone letters on the sidewall.

The instructions fold out into five double-sided panels totaling 15 build steps. The two pages that comprise the painting of the 6 pounder and the assembly of the ordinance and figures are in color. Riich is a Hong Kong based company, and so the instructions are in both English and Chinese. A slight mishap in the instructions part numbering occurs immediately, as the gun barrel is identified as “A1” but is actually “A12”.

This kit has some of the smallest plastic parts and bits I have ever seen, and the placement of some of these parts in the instruction drawings is not always easy to locate exactly. The arrows pointing to where the part should be placed are a little too vague for my liking, so you will have to take your time and figure it out. (Case in point, notice B11 on page 2.)

Because this kit features some of the smallest plastic parts, the attachment points are even smaller! This is of concern for two reasons – first, it is very easy to sand off some of these tiny attachment points/pins after they have been detached from the sprue. Be careful. And second, such small attachment points create a very small area for gluing. Using Tamiya extra thin worked most of the time, but I used some CA where I thought that might provide a sturdier connection.

There are at least two places where you have to make the choice between an early and later version of this anti-tank gun. Step 4 provides the choice between two different ammo racks which are installed on the right interior of the main gun shield. Step 8 suggests another choice with the installation of the outer gun shield plate, providing a double gun shield used on the later version. Step 7 also gives you the choice of having the gun sight shutter open or closed. (I chose to build the earlier version, with only the single shield plate.)

Following the instructions, the build begins with the gun barrel. All of the mechanisms surrounding the gun barrel and breech block are provided with plastic parts, and, as I mentioned, some of these are quite small. If you have one fly off your table, good luck trying to find it! There are only three small PE parts that are used at this stage (P12, P4 and P32). In all, some 35 parts go into the construction of the gun barrel assembly.

Step 4 deals with the gun shield plate, and again, you will have to decide which ordinance brackets you will be installing. Both possibilities are available – a bracketed shelf to hold three rounds, or a canister that holds three rounds. Both are affixed to the right side interior of the shield plate.

Steps 5 and 6 deal with the construction of the extended leg braces, and once again, you are confronted with many small parts to complete each leg, and each leg has different type parts to attach. Later, in Step 9, these legs will be affixed to the axel and you will have to decide if you will construct the artillery piece in the open, firing position, or the closed, travel position. Read ahead in the instructions so that you clearly understand the difference. Frankly, I made a mistake of gluing Part B17 (a pneumatic tube cylinder used in the expansion of the legs in the firing position) into its bracket, which is the position it is in when the legs are closed for the traveling position. Later when I decided to deploy the leg braces in the open, firing position, I noticed my mistake. I could have pried the piece loose, but it was glued securely and I didn’t want to risk breaking the whole leg bracket area to do it, so I just left it. (BTW, the instructions have an icon just above part B17 that suggests not gluing it. So much for paying attention!)

Steps 10-11 provide instructions on the assembly of the tires. Again, quite a bit of detail, as each tire has six parts to go with it, then another four parts (including one PE part) that provides a braking apparatus and an attachment arm for the installation of the front utility shield plate, part A44.

There is a slight problem when you begin Step 12. Part A52 is the flat plate that holds the pick handle and the shovel. The two wooden handles are supposed to lay on top of each other and are held by straps (PE parts) which connect to either brackets molded into A52. There should be four of these brackets, two each on either side of the area where the handles would lay. On my part A52, there were only three brackets, two at the left end of the part, but only one at the right end. This is not really a big deal, but it may be confusing at first.

Construction is rather straight forward, and can be very tedious with all the small parts. Care should be taken with the leg braces and another important choice is whether you are going to construct the gun in the firing position (support legs spread wide) or in the travel position (legs closed and clamped). A nice feature of this construction is that the attachment point for the legs is not glued, so you can open or close the legs repeatedly to decide which way you want to go. One point I missed, however, was that the plate holding the shovel and pick handle is glued in the up position for travel and unhinged and hanging down during the firing position. I glued my plate in the up position, but installed my support legs in the firing position.

Once assembled, I primed the model with a black primer. I then painted it with Testors spray enamel Flat Olive Drab (#1265). Over that, I airbrushed a light coat of Tamiya Olive Drab to break up the monochrome finish and add a little darker color. I brush painted the black wheels with Vallejo Smoke (70939) and then used this color diluted for a general wash. I added some further weathering to create a more earthy, gritty texture by using Doc O’Brien’s powders.

Considering that this review was for the basic construction of the 6 pounder, I did not complete the figures and ordinance that comes with kit. I will certainly do that in time, and it should provide for a nice diorama vignette. All the decals provided are for the ordinance, boxes and uniforms. There are no markings on the gun itself. I did build up two of the figures just to put alongside and establish a scale reference. But for the review, I left them unpainted.

I would like to thank both Riich Models and also IPMS/USA for the opportunity to build and review this kit.

On base left view

On base right view

With figures 2
Previous Next