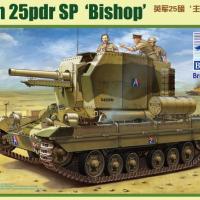 If you enjoy building armor, you must get this kit.

Upon opening the box, one finds 15 sprues comprising 501 plastic parts, 1 photo-etched sheet, 216 individual track links (you will need 202 for the main tracks), and decals for four versions covering vehicles used in both the North African and Italian campaigns. There are 29 parts not included in the instructions, and several for options that are either/or. Molding is very fine with no flash that I could find. The instructions are in booklet form, with a parts sprue layout which you will need during construction. Ejector pin marks are not a problem with this kit. At several points during assembly, the plans call for adding bolt heads which can be found on several of the sprues and which will need careful lifting off – but there are plenty of extras for your next project.

One note of caution: this kit is quite complex with many small parts. Extra dry-fitting and cross-checking of the instruction diagram is recommended. Options are not always clearly marked, in my opinion, and one should check several steps ahead to avoid problems.

As the interior is very detailed and cramped, I painted the interior parts while still on the sprue, opting for rattle can white enamel for the base color. Painting before assembly is a matter of taste, but I recommend this approach for this kit.

Construction is quite logical, with each step creating several sub-assemblies which, in general, mate well with each other.

Starting off with the full interior, steps 1 (sub-steps 1, 2, and 3) and 2 replicate the driver’s compartment and the lowest ammunition stowage. There is a fine .45 cal Tommygun you will make up from 3 parts. The steering levers, driver’s seat, and ammo storage are sub-step 1; the main bulkheads are sub-step 2. I won’t list sub-steps from now on, you get the idea.

I found that, with the small and delicate parts in step 1, the steering levers, it was easier to build these assemblies up in the hull. This prevented fit problems in step 3, when the interior goes into the hull, and the loss of small parts by handling.

Steps 4 sees the radiators come to life, and I could not get the small 3-piece attachment points to stay on the upper end without cementing them. The instructions indicate these should not be glued, but I encountered no issues later on in attaching the radiators to the bulkhead in step 6. Next comes the transmission compartment in steps 5 and 6, and the transmission is a beauty which consists of 18 parts. It is the most detailed I have come across.

Next, I painted the interior details in situ, using model master acrylics. The seat is leather of some ilk, and various shades of silver/steel/iron make up the rest. I painted the propellant portion of the ammo using Testor’s acrylic brass; it was my first experience with an acrylic metal color, and it covered surprisingly well. I still prefer enamels for brass and silver, though. Pictures show the interior and transmission in place with a close up of 1 of the radiators installed.

I built up the suspension in steps 8 through 13, and with the exception of wheels which rotate, the suspension is fully articulated. While this will be of great interest to the diorama maker, it makes getting both the road wheels level and the tracks added a bit tricky. In steps 10 and 11, parts C10 and C11 must be left off until cementing the hull parts together. They are designed to stick through holes in the upper hull, and if they do survive all the dry fitting, they will not survive attachment of the tracks. Trust me on this one.

Steps 14 and 15 are the addition of fixtures and fittings to the upper portion of the chassis, and there are many, many nice things to add. As I just went along following the instructions, the carpet monster in some room of my house got a couple of the smaller parts. I recommend altering the assembly in this way:

• Step 14 – the driver’s compartment parts attaching to the underside of the upper hull should go on absolutely last, immediately before attaching the upper to the lower hull, say right before step 22.

• Both steps 14 and 15 – attach only the sturdiest of the plastic and largest of the photo etched parts before assembling the upper and lower hull. Save the rest for after the tracks are attached, the hulls have been mated, and fenders attached – after step 23.

Steps 16 through 21 are the rest of the upper hull assemblies and there are some beautiful options here. There are two styles of exhaust covers and a range of tools and spare fuel tanks. Customize as you will, but again, leave off the “fiddly bits” until last. Be careful on the placement of the large fuel tank; it can impair the fitting of the superstructure later on. I recommend dry-fitting and marking before reaching for the cement.

Tracks go on and the hulls mate in Step 22, and if you have been careful with the suspension, then the tracks go on pretty easily. There are no ejector pin marks to clean up. The tracks come on small sprues, 12 each, and the attachment points clean up very easily. Step 23 is the fenders, and they were a problem. It’s a simple joint and does not depend on any subassemblies, just a straight mating of fender to upper hull side. Both of mine required some trimming and filling, and this was the only really poor fit in the whole kit. Parts K-36 and the associated PE seemed to be optional and I left mine off.

Now starts the assembly of the main gun and mounting. 16 steps and 65 parts later, you will have a gun in the ready position to place in the superstructure. There is an alternative which allows the gun to be in recoil as well, and I didn’t bother to count the number of parts for that – but it is 10 steps. The PE is the devil to pay, but it looks grand on the kit with your flash light and magnifier. This is the most complex gun I have assembled in my 50 years of modeling, and it is beautiful. This was one of only two places where a bit of filler was needed, on the joint at the top of the breech.

I painted the interior of the superstructure also on the sprue, and assembly was very straightforward. Lots of photo etched parts here, and I particularly loved the PE cage over the radio and long extended clear periscope for the roof. There are two roof options. 7 steps and you’re done, and if you’re careful with the liquid cement, you will have a sliding hatch. The only thing to watch is the placement of the ammunition and other items on the superstructure sides and front. I found constantly checking the clearance for later attachment to the floor, front, and roof a must. I waited on the port side until after I had finished and only had to reposition two pieces. This is much easier if done when the cement is still tacky.

Steps 47 through 50 are extra stowage and the 16-plastic-and-10-PE-piece gas can stowage rack is worth the price of the kit by itself. In the photo showing the extra stowage, I am not even sure you can recognize the two-piece pre-molded alternative.

Step 49 is also the superstructure doors, and a nice PE hold-open is provided. I posed one open and one closed to show them off. The last two steps are superstructure to hull mating in the transport or ready position.

While a beauty of a kit and wonderfully engineered for maximum enjoyment and flexibility, the complexity of the assembly fooled me; in order to meet the deadline I chose not to complete detailing and weathering the interior and not to paint the exterior. I will be finishing those tasks in the future, hence I did not cement the hulls together nor the superstructure and this shows in the picture.

Decals for 4 options are provided, but there are only 2 paint schemes: overall olive drab and a simple brown and OD camouflage. There were not a lot of Bishops made, and they saw limited service. Although I did not finish the exterior painting, I did test the decals on a painted surface and they went on easily and responded well to Microset. The white was opaque and colors well-registered.

This is not a kit for beginners; intermediate modelers will enjoy it and advanced 1/35th treadheads will fall in love. I took mine to several local build nights and it was the center of attention every time. The detail is unsurpassed and options more than usual; the PE is right on and it’s a shame it doesn’t show better in the pictures. This is definitely a kit that could do very well in contests without adding a lot of extras.

There are only a few drawbacks; the fenders are the most severe and I suspect serious armor guys may even replace them with sheet styrene. Options are not clearly marked, so stop and regroup often. While the diagrams are pretty thorough, there are a number of parts whose locations are a bit vague – dry fitting and looking to the next step is the way to go.

Many thanks to Bronco for producing this fine kit, to Dragon Models USA for providing it, and to IPMS/USA for the opportunity to review it.

Lots of goodies
Previous Next