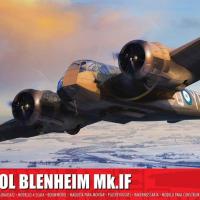 The Airfix 1/48th scale Blenheim is another in a growing line of new kits from Airfix that reflect a high level of detail and sophistication that are proving highly popular with modelers. Molded in slightly soft, light grey plastic, this first Blenheim out of the gate represents the Mk.1F night fighter adaptation of the standard medium RAF bomber. A separate tree of parts is provided to assemble the ventral 4-gun pack that provided the forward punch for this fighter, plus various radar antenna. The gun pack is attached directly over the closed bomb bay, with a single part provided to represent the closed bay doors. It’s obvious from the extra parts included on the main parts trees - large and small bombs, a full bomb bay, as well as doors for an open bay - that a standard bomber version is in the works. As it is, a Mk.1 bomber version can be built from the included parts. All you need are the appropriate decals.

The cockpit is complex and highly detailed, yet easy to assemble and fit snugly within the fuselage. It will be very visible within that unique greenhouse glass nose, so take your time with it. My only after-market additions were Eduard seatbelts. That greenhouse is an unusual multi-part affair, which includes left and right halves for the main canopy. When seating the cockpit assembly within the fuselage, test fit the canopy often to insure it will all close up without any major gaps. When the time came for me to attach the glass halves, it all came together near perfectly, with only some minor sanding of the central seam required. I would highly recommend the use of one of the available canopy mask sets - one that provides both interior and exterior masks. The same applies to the turret. I did it the old fashioned way, with lots of Scotch tape and a new X-Acto blade. Fortunately, the frames are adequately pronounced, making cutting out the tape along the frame edge fairly easy.

The other area of relative complexity is with the landing gear. Parts are included to have the gear raised or lowered. Lowered gear must be assembled and attached midway through the build, rather than near the end, after painting the fuselage. This wasn’t a problem, as they were easy to cover during the painting process. As with the cockpit, Airfix really did their homework and produced a highly detailed assembly for each of the main gear, yet the assemblies fit together well and were easy to install.

Completing the assembly was straightforward and painless. The wings fit snugly along supporting appendages that form part of the interior cabin, and protrude from the fuselage sides. The only filler used was where I modified kit parts or fabricated new ones. I used a couple of thin shims along the spine where I had sanded down an upper panel opening to insure a good, square fit. All control surfaces are positionable, and the flaps can be installed either raised or lowered, with good interior detail provided when using the lowered version. A very handy little jig is provided to hold the turret parts, acting as a “third hand” during the construction of that assembly.

I had wanted to build this as an early Finnish Blenheim bomber, so a few modifications were in order. The wing-mounted landing lights come inset within a glass cover in the left wing. Early Blenheims had dual, protruding lights in the wing, so the light cover was installed and the frame edges sanded down flush with the wing. Two “lights” were cut from clear sprue, the ends sanded round, and indentions were cut out to fit over the wing leading edge. The kit’s enclosed double bomb bay was replaced with an open bay of four concave troughs fabricated from split Evergreen tubes, with bomb attachments made from thin plastic strips and leftover modified 1/350 ship parts. The decals came from one of two Blenheim sheets from SBS Model.

This long-anticipated Blenheim is a wonderful new addition from Airfix. It is well designed and engineered with good fit and attention to detail all around. The instruction sheet is color coded to to indicate the previous step’s part(s), and is very easy to follow. While the included exterior color diagram gives full color call outs, the instruction sheet only gives Humbrol paint numbers. You’ll have to come up with your own Humbrol color reference chart to identify Airfix’s interior color recommendations - one of the very few drawbacks in an otherwise outstanding modeling package. This was easily the most fun build I’ve had in quite a while.

Thanks to IPMS and to Hornby for providing this review sample.