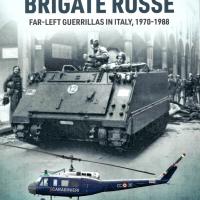 David Francois, from France, earned his PhD in Contemporary History at the University of Burgundy and specialized in studying militant communism, its military history and relationship between politics and violence in contemporary history. In 2009, he co-authored the Guide des archives de l’Internationale communiste published by the French National Archives and the Maison des sciences de l’Homme in Dijon. He is regularly contributing articles for various French military history magazines and regular contributor to the French history website L’autre côté de la colline.

Helion’s latest book in the Europe @ War series is a square back soft cover includes 80 gloss paper pages. The front cover features a black and white photograph of an Italian Army 37 ‘Ravenna’ Mechanized Brigade M113 armored personnel carrier. Here you see it deployed in the center of Bologna on the historic road, Via Zamboni, on March 11, 1977. This day, a college student protestor was killed by police leading to massive riots on the following day. The Luca Canossa color side profile of a Augusta-Bell AB.205 can also be found on Page 36i. This helicopter is one of eight that were modified to have a hoist on the right side. Owned and under the control of the Italian Army, these choppers were operated by the Carabinieri, the military police of the Italian Armed Forces. The back cover features a color illustration of a typical Brigate Rosse militant in action. There was no standard uniform, as most wore university student or factory clothing. What was typical was a black balaclava, or ski mask. The Browning Hi-Power pistol was probably fairly rare for the rudimentary and oddball Brigate Rosse arsenal. I counted 105 black and white photographs and 3 color photos. There are also three color helicopter profiles by Tom Cooper and Luca Canossa. Renato Dalmaso adds six color illustrations of typical uniforms for those involved. There is one black and white map by Tom Cooper that shows the kidnapping of Prime Minister Aldo Moro.

Brigate Rosse was an armed far-left communist organization that was focused on starting an Italian Civil War. Their primary goal was to create a Marxist-Leninist Communist State to align with the Soviet Union and the Eastern Bloc countries. Considered terrorists by the Italian government, it took years for government officials to take Brigate Rosse seriously. Inspired by the successes of Fidel Castro in Cuba, along with other Latin American guerrilla-based groups, Brigate Rosse was founded in August 1970 by university students. Initially focused on the labor movement, Brigate Rosse was not satisfied with simple labor strikes or student protests. Kidnapping company executives and burning their vehicles soon grew into bombings and murder.

David Francois focuses in on the Brigate Rosse activities from 1970 to 1988, but make no mistake, the Brigate Rosse efforts continued into the nineties and later. Brigate Rosse was also not the only communist organization pushing for an Italian revolution there were many smaller terrorist groups, active from World War II to today. That is not to lessen the impact Brigate Rosse had on Italy. It has been claimed that Brigate Rosse was responsible for 14,000 acts of violence in their first 10 years alone. David Francois kicks off with an Introduction and Chapter 1 with World War II and subsequent Cold War. The battle between communism and capitalism is center stage in Italian politics. The three black and white photographs of riots from 1960 on Page 7 help illustrate this. The riots of the early sixties were all focused on political battles as the Italian government tried to grapple with the various socialist parties.

David Francois discusses the initial forays of Brigate Rosse in Chapter 3 as their early principal leaders tried to manage their new organization. Robberies, fire bombings, beatings were all common place until the Brigate Rosse’s first ‘official kidnapping’. Idalgo Macchiarini, a SIT-Siemens executive was their first target; his picture is on Page 20. He was captured and detained in a Fiat 850 van on March3, 1972. A quick trial ensued at gun point in the van along with appropriate propaganda pictures. The sign claims:

Nothing will go unpunished.

Hit one to educate a hundred!

All the power to the armed people.”

The photograph below Macchiarini’s is that of Margherita Cagol, one of the leaders of Brigate Rosse. A left-wing radical since her university days at the University of Trento. Her war name was ‘Mara’ and she met her end in 1975 as she stormed out of a safe house firing at the surrounding Carabinieri.

The kidnapping, imprisonment, and murder of Prime Minister Aldo Moro was the beginning of the decline of Brigate Rosse, although they might not have known it at the time. Brigate Rosse continued to strike in the name of communism, but with the death of Moro, they had lost most of the Italian population’s sympathy. His death also gave the state additional resources and support to shut down Brigate Rosse. This is shown at the bottom on Page 50 where the Carabinieri surrounding a base on March 28, 1980 on Via Fracchia that ended in another shoot out that Brigate Rosse lost. If the leaders of Brigate Rosse didn’t understand what happened, the Carabinieri were taking them much more seriously. All four Brigate Rosse members were killed (all four are in the hallway in the photograph) and important equipment was seized. The top photograph depicts Brigate Rosse members Valerio Morucci and Adriana Faranda. Both were involved in Prime Minister Aldo Moro’s kidnapping and execution. Both were arrested in the house of a KGB agent. Trials and prison followed, but remarkably after denouncing Brigate Rosse, they both were paroled early. Both wrote books on their years in the Brigate Rosse with Adriana Faranda’s being made into a movie, “Year of the Gun”.

Another Brigate Rosse leader is shown at the top left of Page 66. Barbara Balzerani was involved in the kidnapping of US General James L. Dozier. She was finally arrested in 1985 and sentenced to life. She claimed responsibility for the murder of Lando Conti, the mayor of Florence, but surprisingly was paroled on December 12, 2006. She has also cashed in by writing four books. Wilma Monaco, pictured on the upper right was living in France when she returned to Italy to recruit activists for Brigate Rosse but was killed by an undercover policeman. The sections include:

2. The Birth of the Brigate Rosse

I was only vaguely aware of this period of communist rebellion in Italy and had no idea how extensive this period was. What I found most interesting was the Brigate Rosse’s infatuation with kneecapping. Also practiced in Northern Ireland and Bangladesh, kneecapping rarely actually involves damage to the kneecap, or patella. If the victim survives, and does not bleed out, it is intended to punish the victim for the rest of their lives. Although what Olympic skater Tonya Harding was damaging and despicable, that is really not what the action really involves. What is actually done is the victim is shot in the back of the knee, causing much more damage. [The Irish liked to use a six-pack: both knees, both elbows, and both shoulders].

David Francois has jammed a lot of information into this volume, but I still enjoyed the read and was able to finish it over three evenings. The period black and white photographs are all quite interesting and are well captioned. The color illustrations from Renato Dalmaso, Luca Canossa, and Tom Cooper are great. If you own any of the previous releases in the Helion @ War series, you know what you are getting. If this is your initial entry into this series, you will be pleased.