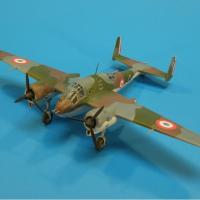 The Breguet 690 series resulted from a French Air Ministry competition for a heavy twin-engine fighter. Similar aircraft were being developed in Germany – the Messerschmidt Bf-110 and in Holland – the Fokker G.1. The Br.693 was the most successful of the 690 series designs. Powered by the Gnome-Rhone 14M engine, over 200 were produced and in service against German forces. These ground-attack fighters were loved by their crews but many were lost to anti-aircraft fire and Luftwaffe fighters during the furious battles in May and June 1940.

Armament of the Br.693 consisted of six internally stored 50 kg bombs, a 20-mm fixed forward firing cannon and four 7.5-mm machine guns. Three of the machine guns were fixed and one was on a flexible rear firing mount. The Br.693 was a good looking, reasonable performing twin engine ground attack fighter but it was outnumbered and overwhelmed by the Luftwaffe.

Special Hobby from the Czech Republic have recently produced some great kits. Their P-40 kits set the bar for detail and accuracy. I have always enjoyed French WW II aircraft so when this kit became available, I decided to add it to my collection.

As it turns out, Special Hobby produce kits under a number of different names and also utilize various sources of tooling to make their kits. This model contains sprues from a no longer available Azur kit with the addition of some photoetched and cast resin parts. An impressive 10-page instruction booklet is included along with a well printed decal sheet with four marking schemes.

The parts are well molded with fine inscribed surface detail. The kit is certainly much better than the old Heller kit of the Br.693 but from my standpoint, the major problem with the kit was that there were very few molded-in attachment or alignment features. Also, the parts tended to be somewhat thick.

Assembly starts with the cockpit. The pilot seat could probably be more accurate but with the PE seat belts in place, it looks reasonably good. Next comes the fuselage. I was impressed with the finely molded interior detail and the added parts to close the wing root openings but the locations of the fuselage formers were not clearly defined. The fit of the various interior parts was so close that if the formers were not located exactly, the fuselage sides will not close. Lots of test fitting is required.

The Br.693 features four small windows on each side of the fuselage. These are well molded and a very tight fit. Some minor sanding is required in some cases to enable the parts to be flush with the surface.

The Br.693 features an internal bomb bay. The bomb mounting rack can be seen in the photo of the fuselage halves. The bodies of the bombs are molded in plastic while the tail fins are PE parts. Two cuts in an “x” shape must be made in the bomb bodies to enable the tail fins to fit. Fortunately, I had a micro-saw from my friend, John Vojtech of UMM-USA to make these fine cuts. Any other saws would have made too thick of a cut.

The wings went together well and they fit tightly to the fuselage. I suspect that the wings should have had more dihedral but that would have required a lot of trimming and extra fitting. I chose to assemble the kit as it came. The bottom halves of the nacelles were two pieces with a former added in the front area. The location of these formers is important because the main landing gears attach to a u-shaped box on the back of the formers. The location and angle of the former controlled the location and angle of the main landing gear. Again, test fitting is needed.

The castings of the engines are beautiful. Unfortunately, they do not fit into the cowlings. The directions indicate that the engines must be reduced to a diameter of 13.4 mm. This means cutting them off at the rocker arm cover area. As you cut off the various rocker arm covers, test fit the engines to the cowl so that just the front of the engine protrudes. The propellers consist of separate blades sandwiched between the front and rear of the spinner. As if this wasn’t tricky enough, while test fitting the parts, I noticed that the kit correctly reflects the fact that the props rotated in different directions. Again, I checked my stash of tools and found another product from UMM-USA, the PropMaster, which allowed me to accurately glue the prop parts together. The kit did not provide any kind of a prop shaft to join the prop to the engine. I found a piece of .050” dia. Rod that worked well.

The final kit assembly step was the landing gear. The wheels were two pieces without much detail. The gear strut features a fork to hold the wheel. Half of the fork is molded on the strut and the other half of the fork is a separate piece that sandwiches the wheel in place. Some test fitting and sanding is required to make the parts fit well.

The model is painted in the French camo scheme of brown, green and gray upper with a sky-blue undersurface. Gunze Color references are given but I used Testors enamels and was pleased with the results. The provided decals were excellent. They went on well and allowed surface detail to show through. An external PE gun/bomb sight is provided and it is excellent but very fragile. The modeler must drill a hole in the model to mount the sight.

The resin casting of the rear flexible mounted machine gun is beautiful with lots of detail. A PE support to mount the gun is provided but it makes the gun too high and interferes with the rear canopy. I ended up gluing the gun to the panel behind the gunner position and it sticks out when the rear canopy is installed. The parts for the remaining guns and cannon were fairly crude. I substituted plastic rod for these parts. No mounting locations were shown for the two nose machine guns so I measured the location and drilled out the mounting holes.

One prominent feature of the Br.693, noted in photographs and on the color drawings with the kit, are fairly large pitot tubes on both wings. I added these with some .035” rod. I heated the rod and pulled it apart to duplicate the tips of the tubes.

I am mostly pleased with the final appearance of this model and now have this interesting twin engine fighter/bomber in my collection. It is probably not a kit for beginners but modelers with moderate experience should have no major trouble with the kit. I hope that I have not sounded negative about the kit. I have tried to simply provide a listing of areas that got my attention during the build. Hopefully it will help others. The kit is recommended with the above comments. A big thanks to Special Hobby for providing the kit and to IPMS/USA for allowing me to add it to my collection.