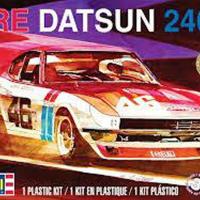 After dabbling in automotive design at GM, Pete Brock started his own design firm in 1965 known as Brock Racing Enterprises, (BRE). His designs were successfully used in GT, CP and Trans Am class racers in the sixties and early seventies. This kit replicates the C Production class winning 1969 Datsun 240Z driven by John Morton.

This review covers the BRE Datsun 240Z 1:25 Scale Revell Model Kit #85-1422. This is a Limited Production SSP Series model and a re-released kit from 1972. Produced as a one-time offering kit and rated a skill level 3 build. I think that‘s about right due to some difficult decals, tutone paint, and some altered build sequences. There are at 105 parts molded in white, clear and chrome parts, along with vinyl tires and engine tubing. This kit features a detailed 6-cylinder racing engine, vinyl oil lines, front and rear spoilers and soft black tires. Finished dimensions are: Length: 6-5/8 ", Width: 2-5/8", Height: 1-15/16".

Assembly starts with the motor. At 12 pieces plus hoses – it’s a pretty detailed engine that begs for some plug wires and detailing. I painted the engine block Gunmetal and the rest aluminum and added some detailing paint to the exhaust headers. It’s pretty impressive for a seventies kit engine.

The suspension pieces are fragile and you’ll need to take care assembling them but with all the detail in the separate parts (11 pieces in the front and eight in the rear) it makes for a nice looking setup. After painting the chassis, add the front suspension to the post holes. Be careful with the shocks because they can be easily bent or broken. Drop the motor into place and note that there is one mount on the oil pan that glues to the center of the front cross-member. As soon as that’s in position add the transmission mount to get everything aligned properly. Adding the radiator and oil cooler I ran into a clearance problem and had to reverse the oil cooler and attached it nearer the radiator. Detail the firewall and drop it into place too.

I painted the interior parts semi-gloss black and added the gauge decals to the dash and set them aside to dry. There weren’t any problems adding the driveshaft and rear suspension parts. On the interior tub there is a copyright script molded in so that should be removed before adding the rest of the interior pieces.

Once that was done I went to add the oil lines to the engine per the instructions but found that the clearances were very prohibitive. I recommend installing all the hoses to the engine and engine bay prior to putting the engine in place. You may find it beneficial to stretch the hose ends and replace the mounting bosses with pins or wire by drilling out the kit mounting pins and replacing them with your own. I drilled out the distributor and added a coil to the firewall to set this build off. You can install the exhaust now by lining it up the header but I would wait until later to avoid breaking it off in handling during the course of the build. I also broke the gear shifter while removing it from the tree so be real careful with that part also.

The tires and wheels presented no issues nor did the rest of the interior parts.

I primed the body and related parts and found that there were pin marks under the hood to fill. The hatch key lock should be sanded off as well as the Datsun emblem which isn’t mentioned in the instructions. On the front fascia the mounting tab on the right side was a little heavy and need to have some material removed for a good fit. The rear deck can be glued in place now. After a light sanding paint the body a bright white, tape off the upper fender line and lower half then spray the top half a bright red. The back deck gets that seventies flat black paint. Paint the window trims black and add the decals. I recommend you use a setting solution product to get them to lay flat and follow the contours. Add a nice clear coat and your well on the way with this build. Put the window glass into place with some white glue and add the bumpers and your finished with a piece of racing history to display!

For a kit from the seventies, the molds are in great shape and the proportions are pretty good compared to the real car. The no frills recreation of the 1:1 car also makes this a quick, clean build. There were no part fit issues, light mold lines and the chassis was clean. The suspensions are a little finicky though and superglue is needed there. The interior is sparsely detailed but this merely mimics the real car. Everything fit together well and the only real issue I had was trying to get the oil lines installed after the engine was in place. A little pre-plumbing work there would go a long way to making this a real joy of a kit to build and the nicely detailed engine makes it a great car to display. There weren’t too many kits of this ground breaking import car and this race version is certainly an eye catcher for your collection. It was a clean build and I have to thank Revell for making this kit available again and IPMS for letting me review it.