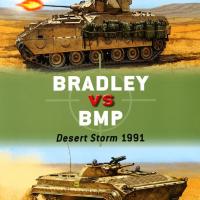 The newest in Osprey’s Duel series is authored by Mike Guardia, a six year veteran who served as an Armor Officer in the United States Army. He attended the University of Houston where he earned a BA and MA in American History. Guardia has been published by Osprey before in the New Vanguard series, but this is his first entry into the Duel series. He has also authored The Fires of Babylon, Hal Moore: A Soldier Once…and Always, and Shadow Commander. Hal Moore, of course, was popularized by Mel Gibson in the movie “We Were Soldiers”. He is an active member in the Military Writers Society of America and has twice been nominated for the Army Historical Foundation's Distinguished Book Award.

The cover painting is provided by Johnny Shumate, a freelance illustrator living in Nashville, Tennessee. Johnny Shumate also provided the two page battle scene and the gunsight views for the MBP and M2A2. The four-views, gunner’s stations, and ammunition illustrations are provided by Illustrator Alan Gilliland. Gilliland spent 18 years as the graphics editor of The Daily Telegraph before branching out on his own to author, illustrate, and publish fiction (www.ravensquill.com).

I counted fifty-one photographs, all but three in color. There are also two color maps showing battle dispositions. Additionally, there are ten color illustrations that allow you to compare the BMP-1 to the M2A2 overall (4-views), as well as in ammunition, sights, and gunner’s stations.

The Soviets led the way in the mid-sixties from the traditional armored personnel carriers (APC), eschewing the half-tracks of WWII for the greater mobility of a fully tracked vehicle. The BMP introduction got the west excited enough that the US scrambled to design a response in the form of the Bradley. After evaluating many contenders for over five years that were too slow, too heavy, or inadequately armored, the US Army committed to buy the Bradley that was too slow, too heavy and inadequately armored. Just to underscore that point, the M2A2 Bradley’s combat weight was 33.6 tons compared to the BMP-1’s combat weight of 15.3 tons. What the Bradley did have was superior sights. The M2A2 Bradley had better targeting equipment and could see farther, night or day.

Although designed for battling NATO forces on the European plains, this book focuses on the engagement with the Iraqis in the 1991 Gulf War. This battle displayed the superiority of the Bradley, but it was due to superior tactics, superior crews, and superior targeting technology. The Bradley could identify their target at more than 3,000 meters compared to the BMP-1 best night time acquisition of 400 meters, enhanced to 900 meters if they used a infrared searchlight. The Iraqi BMPs were hampered by poor maintenance, but more than that, the Bradley had the advantage of following the rule of mechanized warfare. This rule, “see first, fire first, hit first”, dominated the 1991 Gulf War.

As can be seen in the following chapters, Mike Guardia leads the reader through the design and development of the Soviet BMP and the American Bradley vehicles. I liked the way Guardia broke out the technical specifications chapter into armament, protection, and mobility. The color illustrations of the BMP-1 and M2A3 Ammunition assist in highlighting the differences between the vehicles. Mike Guardia sets the stage in the chapter on ‘The Strategic Situation’ before exploring the Iraqi and American combatants training and tactics. The chapter on ‘Combat’ is where the fun begins. Guardian uses first hand battle reports to bring the reader to the battlefront. The detail revealed in the “Ghost Troop’s Sector” is quite intense.

If you own one the previous releases in the Duel series, you know what you are getting. If this is your initial entry into this series, you will be pleased. I really enjoyed improving my understanding of the development of the Soviet BMP and US Bradley and their impact in the 1991 Gulf War from Mike Guardia. My thanks to Osprey Publishing and IPMS/USA for the chance to review this great book.