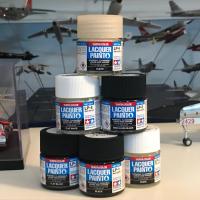 I’ve used Tamiya lacquers in spray cans for years and they are my go to paints for the bulk of my car and aircraft models. Their quick drying and smooth coating, especially the gloss lacquers, provide show-level finishes. Now, after anticipating them for almost two years, Tamiya’s bottled lacquers have finally arrived.

Why I can’t say, but as with most model paints, especially the more recent Testors paints, the colors on the jar labels are somewhere in the fine print. These Tamiya lacquers are better in that respect with colors listed at the bottom center of the label (see Photo 1). Glosses aren’t so designated, while flats and semi-gloss paints are marked as such. Cap color represents contents. The jar caps are typical Tamiya, with plastic seals underneath that give a tight closure to prevent leaks and premature spoilage and minimize dry solids forming around the jar lip that can flake back into the paint.

One noticeable characteristic of these bottled lacquers is their vapors. The lacquer solvents are very volatile and odorous, more so than enamels and acryls. Working in a vented atmosphere is more important with these lacquers than with the latter paint types.

While mixing before use is required, the pigments in these lacquers appear finer than those in acryl paints, and do not appear to settle or separate as readily as in the acryls, which I find need mixing almost continuously when brush painting.

Having used Tamiya lacquer sprays for so long, I did not feel the need to trial each of these bottled paints in my airbrush. I assumed they would perform as the lacquers from the spray cans as the formulas are reportedly identical. However, since I had a 1/48 P-38 ready to prime for an overall natural metal finish, I decided to trial airbrush LP-1 Black. I will use Tamiya TS-83, Metallic Silver over gloss black for the overall finish, then panel that with various shades of Testors Buffing Metalizers and/or Alclad II lacquers. Tamiya recommends TS-14 (the spray can equivalent of LP-1) under TS-83 to maximize the silver brilliance. I’ve done this on two models and the results are excellent. Tamiya’s TS-83 holds up to masking as well as their AS-12 spray (another NMF mainstay), and better than Alclads and the now discontinued Testors Buffing Metalizers.

Paint thinning ratios aren’t hard and fast. They depend on the paint, the airbrush nozzle size, air pressure, humidity, temperature, type and quality of the airbrush and possibly even the color. So I checked various user recommendations and decided to mix one part thinner to three parts paint. I didn’t want to use generic lacquer thinner for this trial and bought a bottle of Tamiya Lacquer Thinner to ensure compatibility with the paint (see Photo 2). Oddly, my local hobby shop had received Tamiya Lacquer Thinner but has yet to receive any of the bottled lacquer paints.

I used my Iwata HP-C airbrush with a 0.3 needle fed by a Grex compressor at about 25 psi and sprayed the upper surface of one wing of the P-38 with the thinned LP-1. I sprayed the other wing with TS-14, gloss black, from the spray can. Other than for coverage per coat, the results were the same. To get the desired glossy finish I would have had to airbrush more coats, probably at least four, from the bottled paint with this equipment. The spray can provided the finish in two coats. For large surfaces like a complete car body or the overall undercoating of the P-38, I prefer to use the spray can lacquer. I would then use the equivalent bottled paint for touch up.

I really wanted to see the performance of these bottled lacquers in straight brush painting, so I brushed the gloss, semi-gloss and flat blacks, and the gloss and flat whites on a piece of gray unprimed sprue (see Photo 3). Lacquers are generally translucent and require multiple coats. This was evident in the case of the flat and gloss whites, which as can be seen required a second coat (left half of bars in photo), or at minimum a primer coat, to cover the plastic. Each of the blacks however covered adequately with one coat. I strongly suspect that most of the other lacquer colors when brushed on would behave as the whites did in this simple comparison and require multiple coats. As for the Clear, it brushed on smoothly with very good coverage and made the flat black as glossy as LP-1.

For quick drying and gloss finishes, it’s hard to beat these Tamiya lacquers. The 10ml bottled lacquers are a welcome addition to the modeler’s painting arsenal, particularly as supplements to the sprays. They give a modeler the ability to apply the same paints as contained in their spray cans with the control of an airbrush or paint brush without the need to decant. I definitely plan to use them, if and when they become locally available.

Equivalent Tamiya spray lacquers to these bottles sprays are as listed below. Numerical designations are not sequentially related.