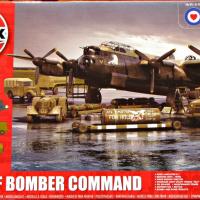 Airfix has a long tradition of packaging kits into gift sets. This tradition continues with the release of the Bomber Command Gift Set. As you can see from the box, profits go to an RAF charity. They have blended their ground support set with a Lancaster Bomber, making for a Bomber Command gift set. I have had the opportunity over the past several years to review the newer kits that Airfix is releasing, and I have been very pleased with their choice of subjects, improved instructions, and ease of assembly. This continues with this gift set. Airfix usually adds some extras to their gift sets. This gift set includes little plastic bottles of Humbrol paint that correspond to the painting instructions. It also has two little tubes of plastic cement. Having never used Airfix cement, in spite of its smell, I certainly like it better than the traditional Testors plastic cement. In spite of the changes that Hornby has brought to the Airfix brand, one thing that they continue to do is pack the sprues without cushioning. The bomber and ground support equipment are segregated into two separate plastic bags. The sprues, however, are stacked on top of each other. There were parts that been released from the sprue and some of the parts for the bomber were warped.

Since this is a gift set, it includes two kits that have been sold separately – the Avro Lancaster B.I and the RAF ground support set. I started with the ground support equipment. The instructions are in the new Airfix style and are very clear and easy to follow. They include the painting instructions and for the Lancaster give you two choices, the Lancaster in flight or on the ground. The bomb bays can be posed open or closed. I chose to put the bomber on the ground and with the bomb bays open. Keep in mind, if you choose to pose them open, the attachment points for each door are tricky. It is best to keep them off until after painting is done. To give the wings a tight fit against the fuselage, the internal bulkheads include spars rather than a traditional tab. This means that the fit of the wings is very tight and, in my case, no gaps. The only issue that I had, and affected how the fuselage was connected, was how the floor of the bomb bay connected to the fuselage. I am not sure it fit correctly because there was a large gap in the bottom on the nose. That being said, it was the only problem with the Lancaster. The remainder of the plane went together without an issue. When you look at the photographs, you will note an odd gap between the front turret and the bulkhead. The piece has gone missing; it’s disappeared. I am a novice at scratch building, so I left that gap in place.

The ground vehicles are all new molds. There was a bit of flash on the sprues, so many of the pieces needed to be cleaned up before they were assembled. The Bedford truck can be made with a traditional bed or as a fuel browser. I chose the fuel truck. The gift set also includes a Morris Tilly, a tractor to tow the bomb carts (two carts are included), an oil browser, and a trestle for engine maintenance. The bomb bay can be configured for two bomb loads, so the kit includes two large bombs (a 4,000 and 8,000 pound including a colorful decal that insults Hitler). I chose the smaller of the two. The kits went together without a problem. I continue to marvel at the detail on the new 1/72 Airfix kits.

At the back of the instructions are full-color profiles of the ground vehicles and the Lancaster bomber. The colors are given in the Humbrol line of paints and I used some of the paint that was included with the gift set and supplemented them with my favorite paint brand, Tamiya. The ground vehicles were all painted in Olive Drab, though the canvas tops were flat earth. The color match between the Humbrol and Tamiya paints are pretty close. For the Lancaster, the little plastic containers of paint didn’t seem adequate for complete coverage of the Lancaster, so I used Tamiya Black for the underside of the bomber and Tamiya Dark Earth for the upper surfaces. Most of my time was spent masking the glass (I used Eduard masks and boy they are great and an absolute necessity for a kit with as much glass as this kit has) and making sure that the Lancaster’s camo scheme was correct as the ol’ MK I eyeball would allow. There was one mistake that I did not realize until I looked at the photographs. The exterior surface of the twin tails should be black, not earth.

Since Hornby took over Airfix, I am sure everyone has noticed that the quality of the decals has improved considerably. Unfortunately, the decals for the Lancaster appeared to be slightly out of register, and they silvered badly. When you look at the wings, you will note that the warnings that are on the wing, are all silvered. I am not sure that this is operator error or an issue with the decals. Bottom line, I was very disappointed. For the ground vehicles, they went on fairly easily. There were, however, a couple of errors. If you chose to build the Bedford MWC as a fuel truck, the assembly instructions call for the spare tire to be attached to the large fuel tank. The decal instructions for the fuel truck does not show the spare tire, so you have to adjust accordingly. Also, on the large oil browser, if you elect to keep the doors closed, the ‘Oil’ decal does not sit well over the door handles. The markings for the Lancaster are for a Canadian crewed bomber in 1945. The instructions for decal placement are pretty straight forward.

I have had the opportunity to build both vintage and new Airfix kits. I am continually impressed by the efforts that Hornby has taken to release new kits and repackage their older offerings. The Lancaster is the first airplane kit that I have built in years and I imagine with an American ground vehicle set available, one can only hope that their new B-17 will be paired with that ground equipment. Outside of the issue of the fuselage and the decals, it is a relatively easy kit to assemble. Most of my time was spent on painting and finishing the kit. My thanks to IPMS and Airfix for giving me the opportunity to review this kit.