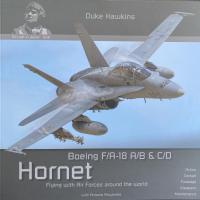 Casemate & HMH Publications presents to us another excellent book from their “Duke Hawkins” series, providing a close up of the "Legacy" Hornet in all its versions: A, B, C and D including the ATARS version. Over 400 photos show every side of the famous jet in service with the US Navy, USMC and the Air Forces of Spain, Finland, Canada, Switzerland, Malaysia and more.

The first thing I noticed upon opening the cover is, there aren’t any chapters proper. Rather, the book is divided into “sections”, each notated in the upper right-hand corner of the right page. Sections include:

As one can see, the book dissects the aircraft thoroughly, with detail photos to match. The photos are all of very high quality, and show more of the Hornet than I think I’ve ever seen. As a reference for modelers, this volume is a must-have. In addition to “up-close” detail shots, there are many photos of the Hornet in the air, on the flight deck, etc. A myriad of camo schemes and international markings provide interest. As was mentioned in another “Duke Hawkins” book review, the Ordinance section glosses over the weaponry capable of being deployed by the Hornet. The M61A1 cannon is shown in detail, but the rest of the section focuses on weapons hard points. A few shots of various missiles are provided, but not “up-close”. This isn’t really a deal breaker for me, but others may have a greater interest in the Hornet’s sting that will leave them disappointed. The book’s text consists entirely of highly descriptive photo captions.

For anyone modeling the Legacy Hornets, or for those of us who love super-detailing, I can’t recommend this book highly enough. My thanks to IPMS/USA and Casemate Publishing for the review sample.