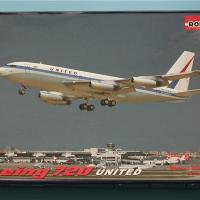 Originally developed as an intermediate-range version of Boeing’s highly successful 707, the 720’s fuselage was shorter by 7 feet 9 inches. A reduced fuel capacity enabled a lighter structure, and with aerodynamic improvements in the form of full-span leading-edge flaps, the aircraft was actually a bit more operationally versatile than the 707, except in range. With an original designation of 707-020, the aircraft was externally similar to the 707-120, so in order to eliminate confusion, Boeing renamed it the 720, and it stands as the only airliner in the “Seven Series” not to end with the numeral seven. Demand for the reduced-capacity aircraft was lukewarm at best, so Boeing only produced 154 720’s (and the improved follow-on 720B’s). The mainstream model manufacturers have largely ignored the type. Roden’s Boeing 720 is a welcome addition to the 1/144 scale airliner enthusiasts’ collections because it fills a void.

The kit features recessed panel lines, and its gray plastic has a somewhat rough texture, so light sanding of all parts will enhance the final finish job. The panel lines on the fuselage are nice on the sides, but fade out as they approach the upper and lower edges of the body halves. Deepening them with a scriber is easy once the fuselage halves are joined. There are only two locating pins for the fuselage---one at the nose and one at the tail---so for strength and ease of alignment, I glued scrap sheet plastic “zipper” tabs into each half (See Photo). When I glued the fuselage halves together, the tabs meshed and provided nice strong lateral seams.

Cabin windows are holes in the fuselage sides; four long clear plastic strips having “window pips” to fit through the openings are glued to the inside of the body halves before they’re joined. Reasoning that trying to successfully mask these would be pretty difficult, I decided to omit them and fill the window openings with white glue or an aftermarket product like Kristal Kleer once the model was painted.

The panel lines on tops and bottoms of the wings were identical, so there were spoilers on the lower wing halves---I filled these in (See photo).

I also reviewed the Scale Aircraft Conversions replacement metal landing gear for this kit (SAC #14415, $11.95) and incorporated it during the build. The white metal parts are copies of the kit’s plastic ones so they’re petite and detailed, but the main gear struts aren’t corrected ones. There are nubs on both sides of the struts, which should be only on the outboard sides---these accept the main gear doors. Roden notes that the kit’s struts need to have the inner nubs removed, and it was an easy thing to file off the SAC gear struts and smooth down the metal along with their mold seams (See photo). The photo shows a corrected kit strut at the lower left, along with the stock SAC gear. Once refined a little bit, the SAC gear dropped into place perfectly, and after ensuring the parts would fit, I removed them for installation after the build was complete.

The build was straightforward with putty being needed in several places. The engines and nacelles build up pretty nicely and the cowlings are one-piece, meaning there are no nuisance seams in the inlets. Nice touch! When I test-fit the engine pylons in place, there was a mismatch with the upper pylon fairings. Judicious cutting and filing reduced the gap to fairly acceptable standards, but I could tell that filling and sanding would be needed. That would be sure to mess up my paint job if I were to wait to install the pylons until after the wings had been painted (See photo).

I decided to attach the pylons to the wings before painting. I assumed that although I could paint things with the pylons in the way, it’d be a little difficult. I wasn’t prepared for just how difficult it turned out to be, but I did achieve nice joints between the pylons, wing, and the mounting plinths on the wings’ lower surfaces.

Roden’s painting instructions reference only Vallejo colors, and I disagree with their specifications of the wings’ and horizontal stabilizers’ upper surfaces’ being white. That may have been true for another airline’s 720’s, but not United’s. Ours were basically different shades of metal. The belly bulge (which is just fiberglass fairings attached to the metal skin of the aircraft) on our Boeings of that day was painted a light gray. Using Tamiya acrylics and Testors Non-Buffing Metalizers to finish the model, I painted all the main components of my model first and assembled them after applying the decals. A friend had Jon Proctor’s book, “Great Airliners,Volume Seven” on the 720, which is a super reference book on the aircraft, and I referred to its illustrations in painting my model, particularly the wings. Though this book is likely out of print, the ISBN number for it is 1-892437-03-1, and if you can find a copy, it’s a gold mine of information on the 720 series.

I sprayed Tamiya gloss white on all the parts as a base coat. To mask off the lower fuselage for the NM areas, I ran the decal sheet through my copier and used that paper copy as a pattern for masking off the NM areas of the fuselage. I felt the mounting tabs for the horizontal stabilizers were insufficient for a good bond, so inserted short lengths of brass wire in the stabs’ forward roots, and drilled corresponding holes in the fuselage to accept those pins to act as additional support.

The decals worked well; they’re right on register and adhere just fine, conforming to compound curves pretty nicely. I had some issues with them, however. First, the blue is darker than United blue---the correct shade is shown in the box art photo. The fuselage cheat line stripe gave me some problems---the first one I applied resulted in the window openings’ not matching up well at all---the white undercoat showed at the forward edges of some windows and at the aft edges of others (See photo). I sectioned the stripe and re-positioned the pieces as best I could, and decided I must have stretched the decal in handling, causing the ill fit. For the other side of the fuselage, I cut the blue stripe from the rest of the decal, separating it from the logo, gold stripe, etc., and applied it with copious amounts of water, trying to float it into position so as not to stretch it. It worked better, but I still had to section the stripe in a couple of places. I used a small brush with touch-up paint to cover the white areas peeking through the holes in the decal, which was a real exercise in minutia for me and my modeling abilities.

The blue color should surround the windshield; the cheat line on the real United 720 became wider forward of the cabin windows, and gently swooped up to cover the windshield, but the kit’s decal is the same width from nose to tail, so it intersects the cockpit windows in the middle. I tried three or four ways to make the cockpit windows look acceptable, and finally settled on using an aftermarket silver window surround from my spares box. It’s not correct---but then, neither is the way the kit looks when built and decaled per the instructions. The decal on the nose had to be touched up where there were gaps---big ones at the base of the windshield (See photo). I used black decal bits for the four small eyebrow windows.

Final touches were adding the wheels, gear doors, and a couple VHF antenna masts to the fuselage, plus red anti-collision beacons top and bottom, and black decal rectangles to the inboard wing leading edges to represent the landing lights.

In summary, if I had to do this version of the model over again, I’d mask and spray the blue cheat line on the fuselage, making it wider at its forward end to accommodate the flight deck windows. That would also solve the problem I had of white peeking through the window holes in the decal, and the small touch-up work I had to do. I’m not sure I’d glue the engines to the wings before painting the model, though---I’d never tried that before, and it turned out to be more than I’d bargained for.

The kit builds up into a nice-looking replica, all the lines and proportions are right, at least to my eye, and though my review sounds nit-picky, a lot of my difficulties with Roden’s 720 kit were probably of my own making so I won’t lay the blame entirely on them. Some projects are just like that---and I’m happy to add this one to my collection

Thanks to Roden, to MMD-Squadron, to Scale Aircraft Conversions, and to IPMS/USA for the opportunity to review the kit and the replacement metal landing gear for it. Both recommended.

Corrected kit gear on the lower left with the SAC replacement ones. The nubs for the main gear doors should be on the outboard sides only.

The cheat line intersected the flight deck windows at mid-height

Parts on the sprues.

Fit issues with the pylons and their wing fairings