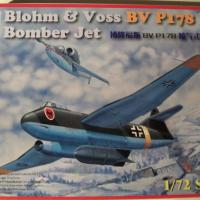 This is the first aircraft kit from Bronco Models kit and it’s a Luft 46 subject and it’s a strange but great subject of a design that never made it of the drawing board. The BV 178 is the usual Blohm and Voss asymmetrical design with one Jumo 004B under one wing. I personally love this type of aircraft configuration and makes for a great looking display model.

The kit makes a great quick build and has a lot of great detail in its design and manufacture.

There are few options given in the build such as landing gear in raised or lowered positions, and cockpit open or closed.

The build starts with the construction of the cockpit and for a small scale kit Bronco has given a lot of details and makes for a super interior. The only issue I had was I would have like to see PE seatbelts or at least decals as this would have added a great addition to an already very detailed interior.

The nose of the aircraft calls for 10 grams of weight to be added, but there is no room. Bronco includes a clear tail support to remedy this. I actually added some weight to the nose and them some more behind the cockpit forward of the wings plus a bit in the front or the engine which helped but it still wobbled and falls tail first.

Bronco also has details in the wheel wells and interior of the fuselage which adds to the great appearance of the final product.

Note that you have to drill out four holes in the fuselage before you assemble it as these are needed for the bomb attachments. Also the pins for the bomb supports are a little short and are not easy to install.

The location of the injector pin marks are well positioned to hide most of them once all the parts are in place.

There are some very fine parts such as the landing gear struts etc. that should be removed from the sprue with great care, as the break very easily as I found out.

Bronco even gives a few hypothetical markings and not just Germany but other Axis forces, which are a great touch.

The decals are very nice with every stencil you need, I think the decals were more complete than the best 1/48 scale kit I have built.

This is an excellent model for Bronco’s first Aircraft kit and I look forward to seeing more kits and hope they move to 1/48 as well. The kit contains a very great level of detail and is well engineered. The interior at this scale is superior to some 1/48 kits I have built. I really enjoyed this build.

Thanks to Bronco Models and Dragon USA for the review kit, and IPMS/USA for the chance to review it.

Finished Right Side
Previous Next