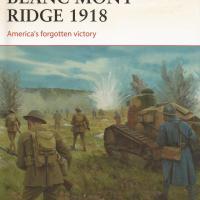 Mr. Turner has illustrated a number of publications for Osprey and specializes in the medieval period. His work with scenes of battle highlight the uniforms and weaponry of the battle and of the historical age, are exquisite in detail, and add drama to the publication. Figure painters and modelers will find the artwork of great value.

Ed Gilbert has authored books for Osprey’s Warrior Series, Battle Orders Series and Campaign Series. Romain Cansiere concentrates on the history of the US Marine Corps. He has co-authored an award-winning book entitled, “Tanks in Hell-A Marine Corps Tank Company on Tarawa.

The action involving two American divisions, the 2nd Indianhead Division and the 36th Arrowhead Division are presented in precise text, black and white images taken during the battle, and color images of the battleground as it appears today. The reader will find that the horror that was combat in WWI is vividly described, as are the strategies that the opposing forces employed. The result of the battle at Blanc Mont Ridge was that the American presence was the key to the success of the Allied effort and resulted in one of the largest withdrawals of the war by the German forces. Beginning on Oct 1st and coming to a conclusion on October 29th . The story, however, lies between those two dates, and this book tells that story in an exceptional manner.

This publication is recommended for those interested in the history of ground engagements of World War I, and in particular, those interested in the history of American troops. It is a treasure trove of information and artwork featuring the uniforms and weapons that were used during this conflict. The book is very well written and informative. The illustrations are excellent in and of themselves and add enormously to the overall high quality and value of the publication. Thanks to Osprey for providing this publication for review by IPMS/USA.