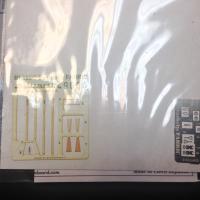 Eduard’s partnership with fellow Czech company HGW continues with their release of these pre-cut printed fabric seat belts. The belts themselves are made from very thin, elastic like fabric onto which the details and colors are printed. The belts are printed in the standard Luftwaffe light tan for this set, with the late war Orlon green available in a separate set.

The hardware is typical Eduard, rendered beautifully and precisely. Three types of mounting brackets are included for the shoulder harnesses, so check your references to the type used specific to your model.

Assembly is straight forward, if not a tad fiddly. The belts re very thin, and thread well through the photo-etched buckles and parts. As noted in other reviews here, they work best if you do not crumple them up before threading them as the instructions states.

Once you have the belts assembled, a dot of CA glue or a good PVA such as Gator’s Grip will hold them where you want them. After I had the belts set in place, I gave them a wash of dark brown AK Interactive wash thinned with a little AK white spirit. This umber colored wash really helps give the belts a used look.

All-in-all I can say these are my favorite seat belts to use in model aircraft, as I have used several sets aside from this review sample. They are a simple upgrade, and they add a world of difference to your cockpit sets.

Thank you to Eduard and IPMSUSA for this sample.

I cannot recommend this set highly enough. Get one. You’ll like it.