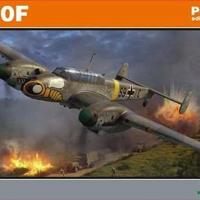 Eduard has released the latest in their great line of 1/48 scale Bf-110 kits. The Bf-110F night and heavy fighter. It follows in a long line of Bf-110 kits and is a welcome addition to the lineup.

Construction is broken down into two major subsections, one for the fuselage and one for the wings and rudders. The fuselage comes first, starting with the cockpit. Eduard’s directions shine in that they show what parts are replaced or enhanced by the Photo Etch and what needs to be done to the part prior to PE application.

The cockpit gets an overall color of RLM 66 first before adding the PE. In the cockpit the entire throttle quadrant gets enhanced as does the right side panel and seatbelts for the seat. You also need to make a decision on what marking option as markings D and E have a different roll bar to attach to the seat. The final cockpit part is the panel and you have a choice of decal or PE. I highly recommend the PE and if you’re buying the profipak you probably already committed to the photo etch. The next 3 pages of the 14 page instruction manual is for the highly detailed and impressive rear section of the cockpit. This includes the radio room area and rear gun emplacement along with the underside gun pack.

The rear section is actually its own module is impressive enough to be its own model. There are multiple areas that are enhanced with the PE including radios, seat belts for both the fold down and permanent seats. Handles for the ammo drums for the underside guns and the rear gun. You also need to make sure you chose the proper rear bulkhead depending on marking option. The rear compartment gets painted in overall RLM 02 gray which also helps to make all the colored PE stand out. Once both sub-assemblies are dry they are then attached together to form the entire interior of the fuselage. You then have some small assemblies to make depending on marking option chosen. These are more radios for markings D and E and what type of rear gun is being added. Next up is attaching the interior module to the fuselage halves. Both sides have even more photo etch and detail parts that need to be added before doing this so check the instructions thoroughly before attaching the module. Both halves need to be painted as well.

Once both halves are glued to each other, I highly recommend setting the assembly aside overnight to dry this way it will have a very strong bond as they are two fairly large pieces and make up the bulk of the fuselage. At this point you can see how “busy” the interior is and before the plane is complete it will only get more so. The PE really gives it a sense of realism and is worth all the extra time it takes to add it to the model.

The last part of the fuselage is the forward gun nose. It also is a small model when completed but sadly none of it will be visible if you glue the upper nose cone on. It consists of an upper and lower nose cone, gun tray, machine guns and ammo chutes gun charging bottles and more. You could realistically just attach the gun tray and guns but where is the fun in that. My recommendation is to attach the gun pack to the fuselage first then attach the upper nose cone to assure a flush fit all the way around. I did it like the directions say to and I had some fit issues when attaching the full pack to the body. Once that’s attached it’s on to the other major assembly of the aircraft. The wings and tail.

The wings and tail are next up in the build the wings are made up of two halves each and you need to do some drilling first depending on which marking you are doing (markings a-c have under wing bomb racks and need mounting holes drilled into the bottom wing) I built both halves and then painted the interior of the main gear wells then set them aside to fully dry and started work on the engine nacelles. Eduard has you build both of them at the same time but tells you exactly which parts go into making each one. They also tell you which one goes on which wing. This is important due to the underwing radiators that attach to the nacelles.

Once the nacelles are attached and have a solid bond the internal walls of the wheel wells are added and the underwing radiators are built and attached. The PE part that goes into the radiator was held off until final assembly so as to not lose it. Both wings were set aside overnight before being attached to the plane. When ready both wings slide into their respective slots and I found that both had very tight connections. Very little filler had to be used on the wing join which was a bonus. The horizontal stabilizer and rudders are also to be attached at this stage but I kept the rudders off until final assembly so as to not knock them off. Ailerons and the tail wheel are fitted but I just attached the strut and kept the wheel itself off until the end as well.

Next up is the intricate and fairly complex main gear. With some patience and study of the instructions building the gear is actually pretty easy but it can seem daunting since the main gear leg is made up of 3 parts, the connecting strut 2 and there are parts that are already in the gear well waiting to accept the parts from page 11. Once in they form a very strong attachment and really hold the plane up well. The final parts of the build are adding the gear doors and various antennae to the bottom of the plane. These were held off until final assembly. The gear doors are keyed to their sides of the well and attach both to the wheel well and to a bar that attaches to the strut. That takes some fiddling to get right but looks really cool when completed. At this point it was on to painting, decaling and final assembly.

Painting was done using the supplied marking and camouflage guide. undersides were done in RLM 76 and the top was traditional splinter pattern of RLM 74 and 75. I used Tamiya paint and had to mix all three colors. I found mix ratios on the internet and they looked good to my eye. The sides of the aircraft were then freehand mottled along with the rudders. Once the paint was dry a gloss coat was added and then the decals. The decals went on with little fuss and a coat of micro sol and set got them to settle into the panel lines nicely. Eduard gives you an extensive decal sheet and also lots of stencils for the aircraft. These really add to the realism and look great. I gave the plane an overall clear flat coat and it was on to final assembly.

Final assembly consisted of first giving all the clear pieces a coat of future to give it that “glass” look. Once dry they were masked using the supplied Eduard canopy masks. A coat of interior color, a coat of primer and then the proper RLM 74, 75 were added to blend them into the camouflage pattern. Once dry a final flat coat was added and the masks removed. Then it was on to adding all the “fiddly bits.” The control horns on the underside of the ailerons, the exhausts for the engines, the propellers and their hubs and the radar, as I had chosen Marking option E that requires the radar be added to the nose. The radar is made up of both PE and Plastic parts but looks great when completed. All the “glass” was added last as many of the canopy pieces needed photo etch parts added to them, this really helps make the kit pop and is a great part of the “profipack” edition. Once all was dry the kit was complete

This kit is a fine addition to the line of BF-110’s that Eduard has produced in 1/48 scale. If you are a fan of the aircraft or of Eduard’s photo etch work then this kit is for you. I highly recommend it and a big thanks to Eduard and IPMS for allowing me to review it.

Left Side View
Previous Next