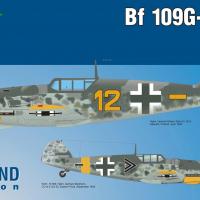 The weekend edition of Eduard’s Bf-109s are for those that don’t want to spend a bunch on their kits. Eduard has started to include markings for two aircraft per weekend edition. This particular release covers the Bf-109G-6 manufactured by Erla. The two aircraft are flown by Hptm. Heinrich Ehrler or Hptm. Gerhard Barkhorn. Erla G-6 are unique in a few ways. The first is that they typically had the extra bulge on the right engine cowling, typical of the G-5 or G-14 variants. Another difference is the ‘sawtooth’ camouflage pattern on the wings.

The box is smaller than the normal box, but that is because you get less stuff. The Weekend Editions don’t have the photo etch and masks that are included in the Profipack. This isn’t an issue as they are available separately if you want to buy them. All the other Brassin aftermarket stuff will fit this kit as well. I elected not to do this as I wanted to do Barkhorn’s aircraft and show it off. I did elect to purchase the Erla camoflge masks available from Eduard. It would be a good time to check how they work.

Since this was going to be basically out of the box build it would be different than some others I’ve done. The cockpit is very quick to clean up. I assembled the cockpit and then primed it and pre-shaded it with Tamiya Flat Black. This was followed up with a thin coat of Tamiya German Grey. A dry brush of RLM 02 and silver was all that was needed to bring the cockpit to life. Minor details were picked out with acrylic paints. There are decals for the instrument panel, seatbelts and lots of other things that would be typically be handled by photo etch. The decals were strangely colored though for things like the instrument panel with the gauges being grey. I elected to paint my instrument panel and while it came out okay it wasn’t as good as the pre-painted ones that are in the Profipack or LEPT sets. I could have used the seatbelt decals as they were nice but I opted to use Eduard’s Steel seatbelts for Luftwaffe fighters. These thin seatbelts work great and I didn’t have any issue with the paint flaking off. A coat of Alclad Flat brought everything together. Some Krystal Kleer was added to the instruments to represent the glass. Then I added the clear fuel transfer tubing after painting it yellow.

Adding the exhausts and prop end cap and the fuselage was ready to close up already. Really quick. The fit is near perfect. The only part that needed filler was where I ham handedly cut the parts from the sprues. Now depending on how good you are with joining the parts you may have to re-rivet some areas. I used a Rosie the Riveter tool and added mine back in.

The wings were assembled with little fanfare. One thing that I like to do is to add the flaps while the top half is separate. If you add them to the area that as Eduard indicates and clamp them tight they provide the perfect angle. I do this to the oil cooler flaps as well. The oil coolers need to be sanded down slightly on the ends to get them to sit down in the area for them but literally it was two or three swipes with a sanding stick. Other than that, everything fit perfectly well. Adding the wheel wells was very easy if you take your time.

Adding the wings to the fuselage was easy enough. I still wish that Eduard would have placed the cut on a panel line and not in a V shape. Even so you will need to fit it properly to get a good fit with minimal sanding and maybe just a smidgeon of putty. One thing that I noticed is that the ‘fasteners’ on the fuselage are not as deep as the ones on the wings. I used a beading tool to deepen my ‘fasteners’. Once everything was filled like I wanted it, I rescribed the panel line from the wing onto the fuselage with Dymo tape and scribing tool. This is an annoyance that should have been caught. That said it is very easy to fix should you choose to do it. While rescribing, I filled and rescribed the lower access panel on the fuselage as it is not scribed properly and the panel line literally disappears. Since I didn’t have a LEPT set which gives you a replacement panel I had to address it. I used an Eduard scribing template designed for the Hasegawa kit. I’ve had it for years and it is a great tool when doing 109s, regardless of the manufacturer. The flaps, slats and ailerons are easy enough to add and fit perfectly.

The tail planes were added and they fit perfectly. I like to add my landing gear before I go any further to give the model something to sit on when I have paint applied. This was easy enough to do and the fit of the landing gear is quite nice.

I added the gunsight to the cockpit and then it was time to close up the cockpit. It fits extremely well. I had masks available to me so I used them. They don’t come in the weekend editions, which I find is strange as this is a time consuming endeavor without the masks. Certainly having masks would help you build this model in a weekend. The canopy parts fit perfectly to the fuselage. After masking up the canopy opening the whole area was overpainted with RLM 66.

Before I knew it the model was ready for primer.

I always wipe my models down with Testor’s Plastic Prep. It takes away any oils and imparts a anti-static property to the plastic which repel hair and dust. I also always prime my models with Alclad Grey Primer. To me it is a perfect primer that dries rapidly and is easy to touch up and sand. Any flaws were fixed up and reprimed.

I wanted to do Gerhard Barkhorn’s machine. I had the book, “Das Vergessene As” by Bernd Barbas which illustrated the aircraft perfectly so I tried to stay as true to the camouflage as I could. The whole model was then pre-shaded with Tamiya NATO Black. I don’t limit myself to just panel lines but prefer to squiggle random dark areas on the model. This breaks up the monotony of the paint colors. After this the yellow areas were painted with MRP RLM04 and allowed to dry overnight. The paint is very thin and required multiple coats to cover the pre-shading. These areas were masked off with Tamiya tape and the MRP RLM76 was added to the belly and fuselage sides. MRP RLM 75 was sprayed over the wings and fuselage spine. Some mottling was added to the fuselage.

I’ve been wanting to use the Eduard camouflage masks for a while and finally had the opportunity to use them here. The Eduard masks are easy to use and provide that saw tooth edge seen on Erla aircraft. Once in place the MRP RLM74 was added and mottled on the fuselage.

A coat of Future with one or two drops of Tamiya Thinner was sprayed over the entire model to protect the paint and prepare it for the decals. The kit decals are remarkably thin and in perfect register. As a backup just in case, I had the Start decals for the book as well, but I didn’t need them. I did use a ‘Scale Black’ Cutting Edge decal for the fuselage crosses. The inside of the cross just didn’t look like RLM74 or black to me.

Another coat of Future and a coat of Alclad Flat had the model ready for weathering. The first thing I did was add a wash of burnt umber artist oils. This dirties up the whole airplane. Then a dot filter was used to fade the paint scheme a little. I used white and yellow ochre for the most part, concentrating on the upper surfaces. Some burnt umber was added in the area of the exhausts to darken them up. Next came some chipping with a sponge and some silver paint. Once happy with that it was time to add some very thin Tamiya Buff in streaks over the entire upper surface of the model. This ‘attaches’ the model to the base. Three drops of Tamiya Flat Earth and two drops of NATO Black were heavily thinned and added to the exhaust areas. Then another drop of black was added to the mix and added to the center to add volume to the exhaust. Some chipping was restored as it is overpainted slightly. Mig Pigments were added to the wheels, doors, wing root and bottom of the airplane to simulate dirty and muddy field conditions. It was set into place with Pigment Fixer. The prop was hit with some Model Master Steel dry brushed onto the reverse side. Then some Tamiya weathering powders were added to the prop blades to dirty them up. With that the weathering was done.

The masks were removed from the canopy and they were perfect as expected. The final pieces such as antennas and hinged canopy were added, as well as, painting the ‘glass’ portion of the wing lights brought the model to a conclusion.

Built basically out of the box with the exception of the Eduard STEEL seatbelts this model came out as I envisioned it. I seem to have great luck with Barkhorn’s aircraft. I built one in 1/32 and this one in 1/48th and they both are some of my favorites. The Eduard Weekend edition kits are a great value for the money. I didn’t like the cockpit decals, especially the instrument panel, but good painting is all that is necessary to work the panel. The rest of the kit fits very well with the only detractor being the V cut for the rear part of the wings. I thoroughly enjoyed this build. The fit was perfect. The decals were great. Everything just went together as designed and it really was a fast build. The addition of the STEEL seatbelts is recommended as is a Zoom set but even without those items this is a winner. If you haven’t built an Eduard 109 you owe it to yourself to do one. You’ll thank me.

Thanks to Eduard and IPMS/USA for the review copy. You can obtain your kit direct from Eduard at www.eduard.com or at your local hobby shop or online retailer.