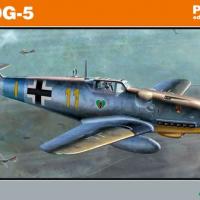 Eduard has four levels of models that they release. The first is normally the Profi-pack with all the plastic, instructions, photo etch, masks, and decals. This is normally followed up by adding Brassin parts that the modeler can choose to add to the kit. The third one is the Weekend Edition which includes the plastic, instructions, and decals. Just a basic kit. The final version, which is normally released just as the Profi-pack is, is the Overtree kits. This is just the plastic parts. It is the least expensive. It does not include instructions, photo etch, masks or decals. The instructions can be downloaded from the Eduard website. So that is taken care of. Now some would think why would they do that? Let’s admit we all have extra decals and may not like what decals come in the kit. Normally when this kit is released there is a small LEPT pre-painted photo etch kit for those that like them. I personally love them and even with the price of the LEPT and the Overtree kit it is a bargin. What I typically will do is buy the Profi-pack kit with all the decals and stuff, plus buy an overtree or two. Then build the Profi-pack and the Overtree kits together as they are that nice. I use the decals and masks from the Profi-pack and then I have two really cool kits for a great price.

The big thing to remember about the Overtree boxings is that it is only available for about a month after the release of the Profi-pack. So you must get them while they last.

OK with all that said I’ve got the Bf-109G-5 and Bf-109G-6 overtree kits in front of me. They are both exactly the same kit in the box. Both kits include Sprues H, I, J, K, N and T. Is that enough to build the model properly? You bet.

Sprue H contains small parts. Sprue I is mostly flight control surfaces. J is the clear sprue with enough canopies to do three different types of aircraft. K is the one-piece lower wing. N is the upper wing surfaces. T is the fuselage and tail assemblies.

The parts breakdown is pretty conventional. Some panels will have to be filled, but nothing too dramatic or drastic. Molded in light grey plastic with finely engraved panel lines and restrained rivet detail. The level of detail is impressive. The only ‘glitch’ is the lower panel under the fuselage that has some shallow detail. The only other thing that I noticed was that the parts breakdown on the aft part of the wings is V shaped and not on a panel line. Not a real big issue but with the fit of all the other parts this is a little strange. They could have put it on a panel line. You will need to scribe the panel line from the wing section to fuselage panel. Another thing that is a minor annoyance is the exhausts are slightly large. Not a big thing for me.

But how does it build up? Let me say that it is a near perfect build. I can never do anything the simple way so I added the PE set that’s specifically designed for the kits. This provides just enough detail to the model. I also decided to build one with the engine open and one with a cockpit. I elected to put the engine in the G-5 because the paint scheme I liked was a little boring. The G-6 cockpit was part of the ADVANCED set. It would fit nicely in my G-6. The extra PE fret was included in the ADVANCED set as well. This added some interesting upgrades. One other thing that the ADVANCED set has is the inclusion of seatbelts. I also had new Brassin drop tank to try out. So my cheap models became a little more expensive.

The only place I needed any filler was on the saddle panel over the guns, slightly under the nose, and at the V at the wing/fuselage join. Some other things to look after, make sure you fill the panels on the right fuselage as directed. Also don’t forget to drill holes for the drop tanks and underwing gun pods, if they are to be used. Once you do that there is nothing really to be concerned about. The fuselage halves fit perfectly. The wings build up beautifully and fit good to the fuselage. The tail planes are a perfect fit.

Some other observations on the kit are that the G-5 comes with the pressurization valve on the PE fret. The canopy has the silica gel tablets included on the canopy section. That is the level of detail you get with these kits.

The fit is so nice on these kits that you could literally build them in a couple of days if you were so inclined. They really do set the standards for Bf-109 kits.

Before you know it, the model is ready for paint. I liked the paint options in both the G-5 and the G-6 Profipack kits so I had the decals in other kits in my collection. So with that, I used the Eduard decals. They all fit well. The stencils worked well as did the aircraft individual markings.

My G-5 was painted overall with AK Airbrush RLM 76 after being pre-shaded with Tamiya NATO Black. Then the model was masked and the NATO Black was used in the exhaust areas.

The G-6 was going to be a unique aircraft that represented the NASM aircraft before it was shipped back to the States. It was overpainted in Italian colors. This required some pre-painting. The aircraft number was added after the camouflage but the German markings were overpainted so they needed to be added. I painted the RLM 76 and Olive Green then gloss coated the model before adding the German national markings. Then the markings were overpainted in the two colors. The radio compartment cover was put on by the Americans upside down for some reason. This required me to cut the decal but the results make for a really interesting look.

The models were weathered in a typical way. The paint was dot faded with white and ochre. Then the panel lines were given a wash of burnt umber. The G-6 was really dirty on the underside so it got more wash than the G-5. A silver pencil and some silver paint was added with a sponge. The exhaust stains were added by Mig and Tamiya weathering powders. Some Mig pigment mud was added to the wheels to ground the model. Then a splash of Mig filter, Brown for Yellow vehicles, was ‘sprayed’ behind the wheels. Oil stains on the belly brought it all together.

After that it was just a matter of adding the last little bits and pieces.

These are the third and fourth Eduard ‘new’ 109s I’ve built. I absolutely love building them. The Overtrees is an easy way to build your collection with minimal cost. Sure you won’t have the PE, masks or the decals but you can buy them separately if you wish and let’s face it you probably have a lot of 109 decals in your stash like I do. Well you probably have a few less than me. Anyhow, the Overtree models are a bargain. Eduard is to be commended for offering these inexpensive alternatives. The only downside of these Overtree kits is their limited time availability. They are available for approximately one month after the release of the Profipack kits. So, get them when they come out. I know I’ll be getting more of them.

Thanks to Eduard and IPMS/USA for the review samples. You can obtain your copy by contacting Eduard directly at www.eduard.com or at your local hobby shop or online retailer.