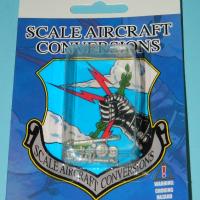 IPMS/USA thanks Ross and his Team at SAC for supporting the IPMS USA reviewer corps with one more of many monthly releases, with extremely useful and well-thought out landing gear additions for the modeling crowd out here in the modeling world. And thanks to IPMS leadership for sending it for review.

This review is for the SAC landing gear released for the 1/48 2016 Eduard release series ME-109F and G models. As such, it covers the majority of ‘109s’ available in the current Eduard catalog.

I bought several of these SAC sets when they came out, because I found the kit gear did not like handling on the shelf. The tail wheel assembly was the major culprit, and this set fixes the issue by being robust and able to “give” without snapping. It has the added benefit of being able to be carefully bent back into position if tagged by the cat, dog, angry wife, or husband, etc.

There are just seven parts here; two main gear with the torque link scissors installed, three tail gear struts (one short tail fork strut with the dust boot installed), and two open tail gear struts with different sizes of wheel and tires to be inserted on the chosen fork.

Much has been written on the Eduard ‘109’s, so I’ll leave that alone. I found the SAC main gear required attention while installing to make sure you have it in the correct rake and track. Once the glue has set it’s a simple matter to install the wheels, etc. I do recommend the installation occur toward the end of the build, as “Why push fate” is a fair admonition.

This was a simple set; I built the model on a business trip, and installed the gear when I returned home. Five minutes with superglue and accelerator, a bit of time for them to cure, and done.

As usual the strength of the gear and lack of requirement for mold cleanup makes acquisition of SAC gear worth the extra cost for kit longevity. I highly recommend this gear for the robust tail gear, and the mains are a bonus as well, particularly if you are going for the all resin AMS engine and guns build. Thanks again to Ross and his crew for working with us at IPMS USA!

Detail of SAC gear on Eduard 109