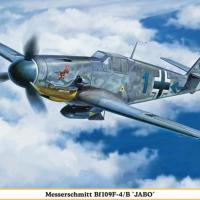 I recently built the Hasegawa 1/32 scale Bf-109 F4 “Jabo” version. This was a great kit to build. In fact, if by some miracle I win the lottery or find a decently paying job, I actually plan on picking another one up.

The decal sheet gives you three versions to build: Oberleutnant Frank Liesendahl from 10 Jabo /JG2, Unteroffizier Felix Sauer from 10 Jabo /JG53, and Oberleutnant Werner Langemann, 10 Jabo /JG53. Unlike the Hellcat I reviewed a short while ago , the decals for this kit were crisp, clean, and really well done. The white is a clean, bright white, and the Blue 1 I plan on using for Liesendahl’s aircraft looks like it will stand out when applied.

I did a build for the review. There were no real problems; in fact, just about everything fit beautifully. The cockpit interior is well detailed, and I did not find the need to add any extras since the cockpit is really nice-looking on its own. I did, however, add some PE seatbelts, since the kit decal seatbelts are not only lacking in detail, but they are silver. I used an aftermarket set to finish the interior, which really brought everything together.

You get a really nice resin bomb and bomb rack for the bottom. The detail on the air intake is beautiful, and it includes the weld seam. The upper part of the engine cowling is well done, as well, and being a separate part means you don’t have to sand and lose detail. The guns are all pre drilled except for the nose cannon – this, you have to drill yourself. The flaps are in a down position, but most pictures I have seen show these up when on the ground. It is an easy fix: you snip two things off and voila, raised flaps. The one part I did not apply to the front wing yet is the front slat because in nearly every picture, once again, the slat sits flush with the wing while the plane is parked, while Hasegawa shows it open in the directions. I am going to do some research before I glue it because I don’t want my limited knowledge of the Bf-109F-4 to mess up an absolute dream of a kit.

Now, there are some areas that have to be filled in, and a few surface details that need to be removed almost entirely on the wings. An educated guess would be that the wings can be used for different versions and that it is easier to fill in the lines and remove the detail than the other way around. There will be a small gap (not too bad) where the wings attach to the fuselage. I left the gap in the picture before gluing to show you where the putty will need to be applied. The gap is not that big when glued, as you can see in the other picture. But it will require a tiny bit of filler to round it off. The other problem – well, not really a problem, but more of a creepy item – is the monkey head you get to use for a pilot. You get a man’s head, and what looks to me like a monkey…which, for me, begs the question: what were the Nazi’s planning to use as pilots when humans became scarce? Perhaps they were foreshadowing Pierre Boule’s novel? Actually, it is supposed to represent an oxygen mask, but come on, people, am I the only one who sees a monkey?

There are two reasons why I did not paint this kit, the first being that my paint area is out in the garage and the weather here is below freezing and has been for weeks. The second reason is that my limited skills should not detract from how absolutely beautiful this kit is. Well, actually, I don’t have two of the colors I need and should pick those up before I start painting. Ha ha ha!

For those who like1/32 German aircraft, this is a must-build. It is a joy to put together, and really a fun and well detailed kit. The only thing I would add is a new set of seatbelts. I wish I could afford to buy one and build another, since this kit went together so well. On a scale from 1 to10, I give this kit a 10+. This one I am proud to recommend!

I would like to thank Hobbico and IPMS/USA for the review sample.

Left side of cockpit

Right side of cockpit

Prop and spinner with cannon drilled out