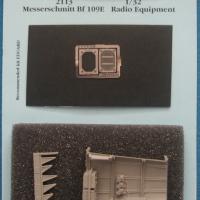 Aires radio equipment was designed for Eduard’s Bf109-E in 1/32 scale. The way the kit is designed to fit into the fuselage should make it adaptable to fit any Bf-109 kit in this scale. Also if you like, each instrument could be cut out to fit anywhere in any model or even in a diorama setting, which makes this a very versatile kit. The detail is remarkable. With very careful painting, all the details can be picked out to show each button and dial on the instruments. Very light weathering also helps, but don't overdo it since the radios weren’t exposed much to the elements.

One aspect of building this kit, just as in the real a/c, is cutting out an access panel to show the installed radio equipment. The photo etch parts are required for this step of the installation and result in a neat detailed way of keeping the panel open for show. Sadly, after the fuselage halves have been joined, not much of the radios can be seen unless a flashlight is used to light up the inside of the fuselage.

The kit includes three main parts. Two are made of dark gray resin and beautifully detailed, as Aires is known for, and one photo etch part for the opening panel on the opposite fuselage. First of the resin pieces is the radio equipment which comes attached to a fuselage panel and is glued to the right side of the fuselage. The second resin piece is a small fret of angled posts which are glued to the main resin piece to simulate fuselage attachment struts. The last item is the photo etch fret, containing two parts. One is a small frame which attaches to the inside opening of the fuselage cut out, and the other is the panel itself, which is attached to the outside of the fuselage panel. This is displayed in the open position in order to see the radio equipment. These photo etch parts are installed after you very carefully remove the panel from the fuselage. Cutting out this panel isn’t very hard but do take your time and measure correctly. I would also advise thinning out this panel, and the surrounding fuselage itself, to scale thickness.

I highly recommend this kit for a small addition of detail which will be appreciated by anyone viewing the model. It certainly adds a lot of interest to the finished model.

I would like to thank Aires for the sample and the willingness to allow IPMS to review their products and a big thanks to IPMS for giving me the chance to review this kit.