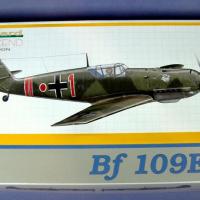 The Bf-109 is an interesting subject, with a rich and fascinating history. Several incarnations and variants make it a very popular aircraft and the darling of a lot of fellow modelers. The first prototype flew in late 1936 Bf 109 V4 (D-IOQY, Werk Nr 878) followed by V5, V6 and V7 in early 1937. The latter prototype was pretty much the production version of the Bf 109B.

The early model Bf 109 first saw combat in the Spanish civil war. This included the Bf 109E1. The Bf 109 flew though-out WW2 and continued to be produced after the war by other manufactures. But that’s another story. The Bf 109E was popularly known as the "Emil" by the Luftwaffe airmen and was the first variant to reach mass production. 1,540 Emil’s were built in 1939. The variant required its own factory to meet demand. The machine was armed with four MG 17 along with the propeller hub mounted cannon or two wing mounted MG/FF 20 mm cannon, with 60 rpg. The Bf 109E/B could carry one 550-lb. bomb or four SC50 (110-lb.) bombs.

While gluing up the fuselage halves I encountered minor fit issues needing tempering and re-scribing. The worst area was the radiator cowling. My copy was a little short shot around the butt ends which I just filled in with superglue and sanded smooth. The rear lower wing to fuselage fit also needed attention.

The decision to open or close the engine cowling revealed fit problems: If I display the engine and gun bay, I cannot use the cowling panels because they will not fit. That’s fine if you don’t care to use the cowling, but I enjoy the sleek clean lines afforded to the Emil with the cowling panels installed. Therefore, closing up the cowling means you will need to trim down the gun platform. If you omit the engine as instructed you will have see-though openings. This is where I made a slight detour from the instructions by actually fitting the engine. We have a pretty good engine out of the box, or you can spend extra time in detailing it. However, the kit engine is perfect if hidden inside the cowling and offering only glimpses.

After I trimmed the engine to fit under the cowling, I went back to work finishing the kit. Once I had readied and prepped the kit I used Tamiya primer, Testors Model Master acryl with great success. The decals went down without a fight and were in perfect register.

The kit was truly an enjoyable experience. I would recommend it to anyone at any skill level. Thanks to IPMS and Eduard for the opportunity to review such a nice kit.