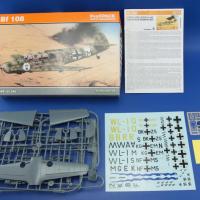 The Messerschmitt Bf 108 Taifun is a German single-engine sport and touring aircraft developed by Bayerische Flugzeugwerke (Bavarian Aircraft Works) in the 1930s. The Bf 108 is of all-metal construction.

Originally designated the M 37, the aircraft was designed as a four-seat sports/recreation aircraft for competition in the 4th Challenge International de Tourisme (1934). The M 37 prototype flew first in spring 1934 powered by a 250 PS (247 hp, 184 kW) Hirth HM 8U inverted-V engine, which drove a three-blade propeller. Although it was outperformed by several other aircraft in the competition, the M 37's overall performance marked it as a popular choice for record flights. Particular among these traits was its extremely low fuel consumption rate, good handling, and superb takeoff and landing characteristics.

The Bf 108A first flew in 1934, followed by the Bf 108B in 1935. The Bf 108B used the Argus As 10 air-cooled inverted V8 engine. The nickname Taifun (German for "typhoon") was given to her own aircraft by Elly Beinhorn, a well-known German pilot, and was generally adopted.

Soon after the first production aircraft began to roll off the assembly line in Augsburg, several Bf 108s had set endurance records. In May 1937 Captain Seidemann won the second place at the air race to the Isle of Man, then he flew the Bf 108 with the registration D - IOSA. The third place was occupied by the pilot Gerbrecht, also on a Bf 108.

A reissue of Eduard’s initial 2002 release, the Bf-108 Taifun brings back a popular kit for aircraft modelers. Molded in gray plastic, the 16 year-old molds have held up very well. No flash was present on any of the parts. Opening the Profipak box, you are met with approximately 87 grey plastic parts (6 unused) and2 clear plastic parts on 3 gray sprues, one clear sprue, a color photoetched fret, a canopy mask, and a decal sheet comprising 5 marking options. Instructions are in the form of a 12 page A5 assembly instruction booklet with full-color painting and marking guide with four view drawings of each aircraft.

Starting in the cockpit, assembly sequencing allows for two options- a full, rear bench seat or a half-seat and extra fuel cells. I chose the whole seat option, as I was modeling the Isle of Man racer (marking not in the kit, I sourced aftermarket decals.) The whole cockpit went together easily, and the PE parts dressed it up rather nicely. Interestingly, in researching the project, I found a handful of reviews from the early 2000’s in which several modelers had issues with the cockpit sidewalls not fitting in the fuselage without a lot of sanding/reworking. I had no difficulty here, whatsoever. I followed the directions, and it all closed up easily. I did, however, have some difficulty fitting the greenhouse canopy, but more on that later.

The nicely-detailed Argus engine went together easily, but you won’t really see it once it’s installed. Two different propeller spinners are offered as well.

The rest of the build is assembling the wings and tailplanes, as well as the undercarriage. Everything assembles easily, and is enhanced with PE details. I lost one of the etched brake lines, so I removed the other one. PE aileron hinges add a nice touch. One error noted in the instructions is the horizontal tailplane supports (#B5, B6) are upside down. The thicker end of the supports go onto the horizontal stabilizer, not the fuselage.

As my subject was one of the 1937 Isle of Man racers, I sourced a Techmod decal sheet (#48602). They were very thin and prone to shattering. I got most of them on OK, but the port fuselage codes gave me trouble. So, I sourced another set. And, the port fuselage codes gave me trouble again. You’ll notice the “D” on the port side looks like American font. It is. I’d had it by this point, and wanted it done. And, despite the gloss coat I’d laid down, most of the decals showed silvering.

All said, this is a welcome reissue of a great kit. Assembly is straightforward and enjoyable. My thanks to Eduard for the review sample.