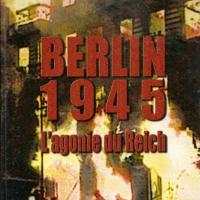 The key to the end of World War II in Europe was the capture of Berlin, the heart of the Third Reich. The American, British and French forces were west of Berlin, but due to American influence had no designs on seizing the city. However, the Red Army was obsessed with capturing Berlin and pushed toward the city with all the speed it could muster The subject of this book is Berlin in 1945 before, during, and after its fall.

Berlin 1945 L’agonie du Reich is the sequel to one Georges Bernage wrote in 2005 entitled Berlin 1945. His new book is a hardback, is 8-1/2 “X 12”, and contains 180 pages. The backing has a smooth slick finish and the pages are heavy with a satin finish.The book contains hundreds of black and white photographs with a sprinkling of color photographs – many rare. The author has included several maps showing troop movements to and around Berlin, some down to the neighborhood level. The book is divided into seven chapters, but there is no table of contents, bibliography, or index.

Now for the bad news: This book is printed entirely in French. I could not read one word of the text, graphics, or headings. However, by looking at the photographs and maps I could tell the material is presented in a chronological order. You can get a basic understanding of what the author is trying to convey by “reading” the photographs.

The book begins with a brief history of Berlin and has several old pen and ink maps illustrating the beginnings of the city. Quickly the author brings us to the point in the life of Berlin just before the Allied air attacks, the Soviet encirclement, and the city’s subsequent downfall. The photographs show large buildings with sumptuous rooms on a grand scale.

In the second chapter, “Berlin Under the Bombs”, the author shows the Berliners preparing for the Allied bombing raids. A number of pictures show the aftermath of the bombings.They look so much like the pictures we’ve often seen of London during the Blitzkrieg. This damage does not compare to the destruction inflicted on Berlin once the Red Army enters the city.

Chapters 3, 4, 5 and 6 cover the arrival of the Soviet Army and how they surrounded Berlin to begin the final onslaught of the city. There appears to be much coverage concerning the German Army’s defense of the city and its ultimate fall. There are street maps showing the movement of the Red Army units as they attacked and won the Reichstag. Because of the number of pictures of people in uniform, it also appears that much information is provided on the German and Soviet Armies’ leadership during the battle.

The final chapter, “Soviet Victory”, covers the final destruction of the Third Reich with its gutted buildings, destroyed equipment, lines of POWs, and bodies in the streets. The final few pages give us a look into Hitler’s bunker and the destruction that took place there. These include some gruesome photographs of buried and half buried bodies found near Hitler’s bunker.

This is the only time I ever wished I could speak French. I feel sure there is a wealth of information on this chapter of Berlin’s life that I was unable to read. However, I was able to find an online free translator that allowed me to understand the chapter names.

The modeler will find little he/she can use in this book other than providing some ideas for armor finishes, vignettes or dioramas. For the student of history (who can read French), this appears to be a book full of information and detail on the last days of Berlin as the capital of the Third Reich. I can certainly recommend this book to those people.

My sincere thanks go to Casemate Publishers for providing this book to IPMS/USA and to IPMS/USA for allowing me to review it.