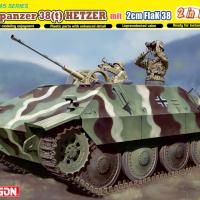 I’ll be honest – I’ve always had a thing for AA mounts. When Dragon decided to release this, it struck an immediate chord with me.

Germans in World War 2 certainly had a propensity for creating makeshift anti-aircraft installations on various vehicles. Surprisingly, this particular Hetzer modification, which apparently never made it beyond the prototype stage, was not actually designed to provide air cover at all, but to serve as a reconnaissance vehicle.

Like many Dragon kits, this one includes a plethora of already available sprues along with some new items. I spotted parts from a standard Hetzer, a 38(t), a Marder and full 20mm AA kit, among other bits. This is a lot of box and a lot of plastic for such a relatively small vehicle. Consequently, about 50% of the parts supplied are going to find their way into your spares collection. Nothing wrong with that. Do, however, expect to spend a good part of your modeling time looking for specific parts. Because of the mixing of various kit sprues, a couple share the same letter designation. In addition, there are a few incorrect part numbers in the instructions, but nothing that should cause the average modeler much consternation. A small fret of photoetch was included for ammo cases and some peculiar hull brackets but I elected to pass as they didn’t seem to add much to the model.

As with most Dragon models, this kit does not simply “fall together”, Step 1 being a good example. In building the bogies, the spring systems have no pins or positive locations to mount on, so they just sort of “hover” over the wheel supports. A small piece of Evergreen rod can easily replace these missing pins, but you’ll still want to check the stance of the vehicle to make sure all the wheels are level and aligned.

Another thing to definitely watch out for is the “2 in 1” aspect of the kit. What this means in this case is that two different pedestal mounts are supplied for the 20mm gun. Each choice requires some modification of the internal hull parts, and if you’re not paying attention (as I wasn’t) these differences can nail you. Read the instructions carefully and make sure you know which version you want to model before hitting Step 6. If you choose the more complex “b” version, as I did, be aware that you need to shave some substantial plastic off of Part M30, but the picture guide can be a bit confusing. If you check it against the internal layout, you’ll see that you’re providing space for the driver’s seat. This alone should help you orient this complex piece and make it easier to understand what needs removal.

In Step 9 be very careful fitting the rear bulkhead into the top hull half, as any misalignment here can make it difficult to fit the hull halves together. Best to fit the bulkhead in place and immediately mount the assembly to the lower hull so that necessary adjustments can be made while the glue is still wet. Although the interior seems somewhat oversimplified, it provides a good basis for any extra detailing you might want to add.

Step 15 through Step 19 are for the construction of the 20mm gun itself, and this is pretty straightforward, although you need to be aware of the rods and pistons required for each of the various firing angles supported. I suggest choosing the angle you prefer, then gathering up all the necessary pieces for that attitude, which are scattered on various sprues and look very much alike. There are a variety of other choices to make with this gun, including recoil tubes and scopes, so take your time. Step 17 threw me a bit, as they show a complete assembly for the gunner’s seat, but in actuality all you need is the support and the seat itself. Because of the tight fit of the gun mount into the hull, even the seat back will hinder rotation.

Step 21 is the assembly of the link-and-length tracks, and to be honest I actually performed this step right after fitting the bogies on the hull, which is the build sequence I’d personally recommend. The tracks fit very well, and there are a few individual pieces left over if done properly. I found myself using three extra links per side than what the instructions suggested. Adjusting the idler wheel can help ensure you don’t wind up with an awkward space at the final link.

Now on to painting. Although the instructions list a couple of “unidentified units” circa 1944, the information I was able to glean online suggest that this vehicle never went past the prototype phase, so these are most likely fictitious. In any case, I elected to generally follow the box top art instead, which to me was more interesting.

As a side note, you may discover during your build why this machine was probably never actually deployed in the reconnaissance role for which it was designed. Firstly, because of the hull configuration and height of the pedestal, the main gun can only depress to about +5 degrees, making it difficult to engage ground targets. This problem could be rectified fairly easily, but the second issue isn’t so easy to fix. The 20mm gun mount makes for a VERY tight fit inside the hull, and seating in the vehicle is only provided for a driver and a gunner. Assuming the obvious crew of driver, gunner, loader and commander, where everyone else was supposed to be when this machine was on the move is anyone’s guess.

Despite a few assembly challenges, I found myself liking this little model very much. There are no issues that can’t be overcome by a modeler with modest building experience, and the extremely simple and clean look of the vehicle appeals to my sense of aesthetics. Besides, I’ve always been fond of “what if” models, and this one fits the bill. If you’re up to a little extra work, this is an enjoyable build of a fascinating little machine. My thanks to both Dragon Models and IPMS/USA for the opportunity to add this critter to my collection.