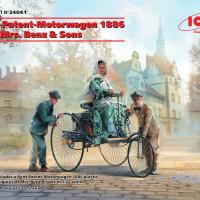 Mrs. Benz is posed sitting on the Motorwagen with her hands on the tiller, and the two sons are alongside the vehicle, maybe pushing to get it started? The poses look realistic and natural, but the detail is a little soft for a 1/24 scale figure.

Instructions are provided on a single sheet with a diagram of the sprue and Revell & Tamiya paint colors listed on the front. The opposite side shows assembly diagrams and paint instructions for each of the figures. The parts are provided on one sprue with Mrs. Benz and both sons.

Shoe soles on the sons were cut away to get rid of the Doc Marten style boot look and make them appear more civilian. White glue was used to hold some parts temporarily for the photos. Fill was used in certain areas (the seam going down Mrs. Benz’ dress, for example) during assembly of the figures. The sons need filler along the shoulders and coat lapels, as well as along the sides of their jackets. Mrs. Benz also needed filler when her head scarf is glued into position.

Mrs. Benz was painted by one of the members in my local model club who is an excellent figure painter and shows how nice the figures will be when painted. The figures look very nice with the vehicle and the poses are very natural. The fit of the parts is good, although some filler at the joints between parts is required. The figures are well done and a nice addition to the vehicle.

Thanks to ICM for producing these nice figures, and for providing the review sample to IPMS.