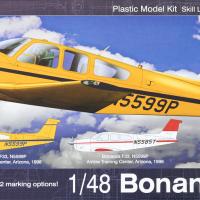 The Beechcraft Bonanza V-tail is one of the sleekest general aviation designs out there, and it’s still flying today. I wish I would have had the chance to log some hours in one before I gave up flying. The Bonanza was introduced in 1947 and is still produced today, although the V-tail design was retired in 1982.

The Minicraft F33 Bonanza reutilizes their previous Bonanza molds, but includes a new sprue with three additions. These three additions include a 3-bladed prop, vertical fin and aft fuselage section to update the V-tail Bonanza to the standard tail version. Included with the kit is a stand allowing you to place your finished model (with the gear up or down) in an inflight setting. Minicraft also includes a set of Cartograf printed decals for two Bonanza aircraft. My first impression of the kit was that, despite some flash here and there, the recessed panel lines and details are very well done. As best as I can tell, this kit is utilizing the Bonanza molds dating back to the late 1990s. The clear parts are a little thick but clear, so I didn’t anticipate any problems here. The engine detail looks very good, and if you wish the engine cowling can be removed to display this fine engine. The only negative that jumped out at me was a couple of ejector pin marks on the fuselage interior walls that could not have been placed in a more difficult position to hide. The molder maker could have moved both pins less than a few millimeters and they would have been on flat surfaces. The same goes for the front wheel assembly. A rogue ejector pin mark is right on the nose wheel.

In general the kit builds up like any other single engine prop aircraft by starting in the cabin, but the seats are attached to the wing center section. The instrument panel and yoke assembly are attached to the fuselage interior, as are the side glass clear pieces. They did not fit as well as they could/should have, and it did take some sanding to get them to fit into the sides pieces. With this complete I sealed up the fuselage. The wing is then attached, and it did have a wing root gap on either side that needed filled. A little stretched sprue did the trick. I also ran into an issue where the two fuselage halves are a slightly different length. I did my best to line up the panel lines and fixed the nose later in the build.

It was about now that I realized in my excitement I forgot to saw out the aft fuselage section to accommodate the standard tail. Argh! So, I built up the vertical stabilizer utilizing the new parts so I could compare it to the V-tail design; the comparison is pictured at the bottom of this review. I do not for see any problems with the standard tail conversion. The next step is to build up the engine and place it in the nose. As I mentioned before, you can display the engine compartment open if you wish.

Because of the slight offset with the fuselage halves, I did have to do a little putty work when attaching the upper engine cowling. It is now time to attach the remaining antennas, landing gear, etc., and you have a nice little representation of the Beechcraft Bonanza. Don’t forget she will need some lead in the nose if you don’t want a tail sitter. I filled the entire engine bay under the engine with lead shot just to get her to stay on the nose. To finish the kit off, I masked my example then primed and painted with gloss Tamiya white. The decals went down great and reacted well to Micro Sol /Set.

I found this kit to be a tiny bit more challenging than a complete beginner should have to deal with (due to the fit issues), but nothing someone with 4 or 5 kits under their belt shouldn’t be able to tackle.

I would like to thank Minicraft Model Kits for providing this great little Bonanza kit and IPMS/USA for the chance to review it.

Finished Model - Right Side
Previous Next