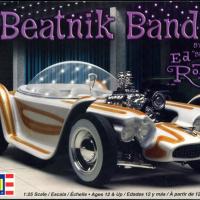 Ed “Big Daddy” Roth’s Beatnik Bandit was introduced to the automotive public as the May ’61 cover of Car Craft magazine. The second in his series of show cars, it became popular as it toured the custom car show circuit in the early 60’s. In the next years, “Big Daddy” Ed Roth continued to improve the breed of custom show cars with his creations. The “Fiberglass Wonder” is now permanently housed in Reno, Nevada in the National Auto Museum.

This kit was originally released in the 60’s and has been re-released multiple times. In this incarnation, there are 128 parts, some of which are not called for in the instructions. The kit includes a detailed chassis and suspension, with a blown V-8 engine. The bubble top is hinged and the front wheels are positional. Molded in solid white and clear plastic, there are also numerous chrome-plated parts and soft black tires. The decals are for the authentic Ed Roth designed paint scheme.

In my opinion, some of the assemblies may have been a bit overboard in the number of parts required. For an example, the engine, blower and transmission assembly included 32 parts, 6 for the engine block alone. As for the parts themselves, the molds are showing their age. The details are getting a bit fuzzy and I felt that cleanup of the flash from the parts would never end. The chromed parts suffered the worst of the cleanup process as by the time the parts fit properly; much of the chrome plating had been removed. I completed the chrome removal process, assembled as much of the future chrome assemblies together as I was able and then used Alclad II’s Chrome paint to bring them back to life. I followed that process for the engine’s blower parts, the suspension parts and the four wheel and hubcap sets.

After cleanup, the parts went together fairly well. There were still a few problems with fit around the passenger tub. The body shape required several parts around the front and headlight areas to replicate all the compound curves found on the original car. A bit of filler and my trusty Flex-I-File was all that was needed to get the body in shape.

The instructions called for the entire frame to be painted gloss black, so I assembled as many of the pieces as possible and let loose with the paint.

Whitewall tires were my next challenge. I tried several methods of painting the tire sides but, none of the results met my expectations. I ended up using white decal material with some computer-printed guides on the paper. After sanding the tread area of the tires and giving their sidewalls a coat of Future with a cotton swab, I trimmed the decals to shape and applied them on the tires. I was happy with the final result.

The body, fenders and tub were all painted with several light coats of Tamiya Pure White followed by several more light coats of Tamiya’s Pearl White. I decanted both colors and applied them with an airbrush. Select panels of the seats and interior were treated to washes of a mix of Testor’s acrylic paints to add some color under the dome. The clear bubble top was protected during the build process to limit the amount of scratches it received. I dipped the dome in Future, set it aside to dry and installed it and the retainer ring after decals were applied to the body.

When I had first opened the box, the decals sent a shiver of apprehension down my spine. There are quite a few decals to apply and no extras. Even a company logo or part number decal would have been nice to use for testing reaction to setting solutions. I started by applying the small teardrop decals behind the rear wheels. I decided if they didn’t work well and I ruined them, they may not be so noticeable. I started with Microscale’s red label (Micro Sol) and much to my excitement, the decals settled in very nicely. I applied the decals on the body and, I must say they looked pretty nice. They settled in well to the major curves on the main body. Then I applied the decals to the fenders. There are five decals to each fender side; two each for the crowns of the fenders, and one for the running board down the side. An added touch of Solvaset helped the sharp curves of the fenders lay down a little. Even after I did some small cuts with a razor knife, in the end, the curves were just too much and I ended up with a series of small wrinkles on the fenders.

This kit nicely represents a time in automotive history when customizing cars was developing into an art form. There was quite a bit of flash but, the parts cleaned up leaving most of the needed detail. The decals responded better than expected to setting solutions. Without the recent developments in chrome paint, all the chrome on this kit may not have turned out as well it did. An extra decal or two for testing and pre-painted whitewalls would have been appreciated. The fit of the majority of the parts was quite good. The instructions clearly showed part placement and painting instructions. I would have to agree with the manufacturer that this kit is a skill level 3 due to some tiny parts, the complexity of some of the assemblies and the decals.

My thanks go out to IPMS USA and Revell, Inc. for the opportunity to build The Beatnik Bandit by Ed “Big Daddy” Roth.